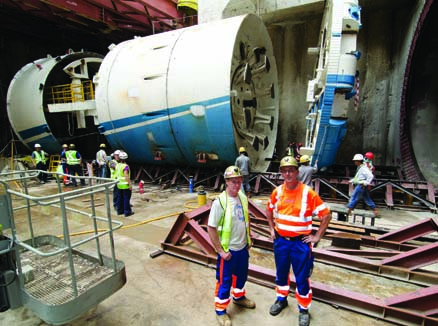 The first of six 6.65m diameter Robbins EPBMs to be used on the Singapore LTA’s 21km long Downtown Line 3 project is preparing to begin excavation this month. The EPBM is one of two that will excavate contract C927, running between Bedok Park and Bedok Reservoir, for contractor CMC di Ravenna of Italy.

The 62 tonne cutterhead for the first of the two machines was lowered in August. “Assembling the machine was a challenge due to the small shaft opening. This required assembling the shield in smaller sections than usual, and required the use of a purpose-built lifting adaptor to lower the cutterhead support and forward shield separately,” said Mark Passey, Robbins Site Manager. The cutterhead was then lowered through a 14m opening through the shaft cross bracing. The small launch area required shunting of components forward and backward on the launch cradle using two 100 tonne hydraulic jacks.

The two Robbins EPBMs for the C927 contract will bore parallel 1.35km tunnels through alluvium consisting of cemented sandstone and beach rock. Each of the EPBMs was designed with mixed ground cutterheads and cutting tools interchangeable with disc cutters. Flexible additive systems are capable of injecting foam, polymer, Bentonite, or grout depending on the conditions. A probe drill on each of the machines is capable of drilling through the face and around the periphery of the shield, enabling quick and efficient excavation if any changeable ground conditions are encountered.

The TBMs are part of a massive undertaking for Singapore’s Downtown Line, Phase 3, with its 16 stations, will utilize 29 TBMs in total. Running almost parallel to the East West Line (EWL) of the metro, the DTL3 will provide a convenient transport link to the Central Business District and Marina Bay areas of Singapore.

The entire Downtown Line including phases 1 and 2, for Singapore’s Land Transportation Authority (LTA), will consist of 42km of new track with 34 stations.  Once complete in 2017, the DTL is estimated to serve half a million commuters daily.