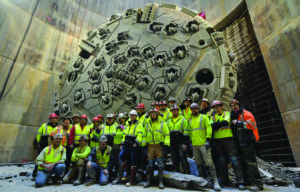 Salini Impregilo and its US subsidiary Lane Construction Corp. have completed excavation of the $153M Dugway Storage Tunnel (DST), in Cleveland, Ohio. Having begun in July 2017, the 27ft (8.2m) diameter Herrenknecht TBM, named Fulvio, broke through the wall of the DST-8 shaft on March 21, bringing its 2.8-mile (4.5km) journey to an end.

The DST, set to go into service in 2019, is the second of seven tunnels commissioned by the Northeast Ohio Regional Sewer District (NEORSD), under its 25-year $3bn Project Clean Lake program to reduce Combined Sewer Overflows (CSOs). The combination of large tunnels and treatment plant improvements will reduce the volume of CSOs discharging into Lake Erie by 4 billion gallons per year.

The DST is lined with precast tunnel segments to an i.d. of 24ft (7.3m). The tunnel ranges in depth from 200-230ft (60m-70m). There are also six shafts of varying diameters and depths, four gate structures, four control vaults, eight vent vaults, three drop manholes, one diversion structure and 1,804ft (550m) of connecting tunnels and pipelines of various sizes, depths and lengths.