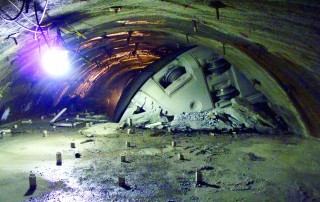 On June 2, 2010, one part of New York City’s famed “Tunnel to Nowhere” came closer to reality. A Robbins Main Beam TBM, for the Dragados/Judlau JV, was the first of two machines to finish a series of short rail tunnels below Manhattan’s Grand Central Station. Altogether, the Robbins machine has excavated 5.2km of tunnel since its 2007 launch, averaging 16m per day in the last month of boring.

The completion is an important milestone for the East Side Access project, which was stalled in the 1970’s due to lack of funding.

A second Double Shield TBM is preparing to embark on its third of four tunnels. The short tunnels, four to each TBM, will lead to the upper and lower departure and arrival platforms of two main stations currently under construction.

The Robbins machine was retracted at the end of each tunnel heading using specially designed, hydraulic side and roof supports to move past installed ring beams and rock bolts.

“The bolted cutterhead, in five sections, was the best possible design for boring multiple tunnels and retracting back through the ring steel,” said Kerry Clark, Robbins Field Service Superintendent. The hydraulic extensions, combined with the removable cutterhead pieces, allowed the entire machine diameter to be reduced from 6.7m to just 6m.

Crews maintained good advance rates despite difficult project conditions. At one point, the parallel TBM excavations were separated by a slim 1.5m thick pillar of rock, requiring the Robbins machine to operate at 45 to 50% gripper and thrust pressure. Much of the drive was also done with a live subway tunnel 1.5m overhead.

The Metropolitan Transportation Authority’s East Side Access Project will connect the boroughs of Manhattan and Queens below the East River, providing rail service to 160,000 daily customers. Tunnelling in soft ground on the Queens side of the project is expected to start later this year. The completed East Side Access line is scheduled to begin service in 2016.