The machine, which was launched in 2017, grazed the cavern on the tunnelling operation’s left side. The crew named the cavern “grotte Marie Lesimple” after their site geologist.

“We hit the corner of it. To cross it, we had to erect a 4m high wall of concrete so the TBM would have something to grip against,” explained Marc Dhiersat, Project Director of Galerie des Janots for Eiffage. A small door allowed access inside the cavity, which formed naturally at a point 60m below the surface. The TBM was started up and was able to successfully navigate out of the cavern in eight strokes without significant downtime to the operation.

“This is certainly unusual, to come across a cavern of this size and significance. It is somewhat related to the geology, with karstic and volcanic formations having the most potential for underground cavities,” said Detlef Jordan, Robbins Sales Manager Europe. Karst cavities were a known risk during the bore, but the cavern was not shown in vertical borehole reports conducted from the surface along the alignment.

A further 1.8km will need to be tunnelled before the 2.8km tunnel is complete. “It is possible there could be more unknown caverns. We have a geotechnical BEAM system on the machine, and are conducting probe drilling, shotcreting, and maintenance in a separate shift,” said Dhiersat. The BEAM system, standing for Bore-tunneling Electrical Ahead Monitoring, is a ground prediction technique using focused electricity-induced polarization to detect anomalies ahead of the TBM.

The crew encountered difficult ground conditions early on in the bore, consisting of limestone with powdery clays. “When the machine is boring it does well. We have good production and it’s a good machine for hard rock. But sometimes it’s not hard rock that we encounter,” said Dhiersat. The weak rock and clay conditions necessitated ground support including resin-anchored bolts and rings in bad ground, topped with a 10 to 15cm thick layer of shotcrete. Despite five months of poor ground conditions, Eiffage is optimistic that conditions will improve and the tunnel will be complete in the next four to five months. 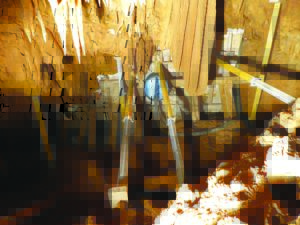 Galerie des Janots is one of the fourteen operations designed to save water and protect resources, which are being carried out by the Aix-Marseille-Provence metropolis, the water agency Rhône Mediterranean Corsica, and the State Government. The future Janots gallery will replace existing pipelines currently located in a railway tunnel—these original pipes have significant deficiencies with estimated water losses of 500,000 cubic meters (132 million gallons) per year.

The completed tunnel will pass under Le Parc National des Calanques, with cover between 15 and 180m, in order to replace the pipes that are currently being utilized for the water supply networks. “The current pipes have a capacity of transit limited to 330 liters per second, which is largely insufficient in the summer period. The objective of the operation is to secure the lines and increase capacity to 440 liters per second,” said Dhiersat.