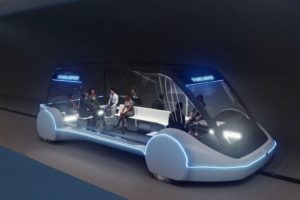 Chicago’s Mayor Rahm Emanuel today announced the selection of The Boring Company to build and operate an express service to O’Hare International Airport. The company plans to transport passengers between O’Hare and Block 37 in the Loop in approximately 12 minutes each way by utilizing electric vehicles that run through new twin underground tunnels. The project will be funded entirely by the company with no taxpayer subsidy.

“Bringing Chicago’s economic engines closer together will keep the city on the cutting edge of progress, create thousands of good-paying jobs and strengthen our great city for future generations,” Mayor Emanuel said. “This transformative project will help Chicago write the next chapter in our legacy of innovation and invention.”

The Boring Company was one of two final teams selected to respond to a Request for Proposals issued in March by the Chicago Infrastructure Trust (CIT), on behalf of the City of Chicago. The RFP was seeking a respondent to design, build, finance, operate and maintain an O’Hare Express service. The City will now begin one-on-one contract negotiations with The Boring Company. Following this negotiation process the agreement will be presented to the City Council.

The RFP required bidders to deliver express service from downtown Chicago to O’Hare International Airport (ORD) in 20 minutes or less, cutting more than 50 percent off current travel times. The Boring Company plans to reduce the trip even further to 12 minutes by utilizing automated vehicles that travel over 100 miles-per-hour.

Each vehicle will carry up to 16 passengers, plus their luggage, and will depart from O’Hare and from Block 37 as frequently as every 30 seconds. The Boring Company plans to charge fares below the RFP requirement that this premium service should cost less than current taxi and ride-share services.

The company plans to utilize the unfinished underground transit station at Block 37 and create a new station at O’Hare. The planned route travels straight northwest from downtown following public way alignments. The specific alignment will be finalized during contract negotiation.

The City requires the O’Hare Express service be funded solely by project-specific revenues and financed entirely by the developer. No taxpayer funding will go towards the project.

During the negotiation phase, the company will be required to further develop its plans and ensure they meet all necessary safety, construction, financing and operating requirements. The contract will also include protections to ensure taxpayers would be protected against any costs incurred by an incomplete project. The overall project costs and construction timeline will be finalized during this process.

The express service will offer a myriad of benefits to the City, travelers and residents: providing a faster commute between the airport and downtown; helping to mitigate congestion on the region’s roadways; fostering economic growth and creating jobs throughout the lifetime of the project. The current total daily number of air passengers traveling between O’Hare and the Chicago Central Business District is approximately 20,000 and is forecast to grow to at least 35,000 daily air passengers in 2045. The express service will also be a zero-emission system, replacing automobile traffic on a congested highway and generating a significant positive environmental impact.

When combined with the upcoming expansion that will increase O’Hare’s gate capacity by 25 percent and the CTA’s $492 million investment in modernizing the Blue Line, the express service project will generate an unprecedented strengthening of Chicago’s position as a global city.