Expressions of Interest have opened for the longest tunnelling package in Victoria’s history – delivering around 16kms of twin tunnels between Cheltenham and Glen Waverley on the city’s ambitious Suburban Rail Loop (SRL) mega-project. A second package will see the tunnels constructed from Glen Waverley to Box Hill, completing the SRL East rail corridor.

In another first, up to 10 TBMs could be used for SRL East – each custom built to suit the local ground conditions.

The high number of TBMs will speed up the tunnelling process, with launching sites planned for 3 locations – Monash, Heatherton, and Burwood.

The initial start of construction will be underway in coming weeks, paving the way for major works, including the preparation of the TBM launch sites – creating hundreds of direct local jobs.

Tunnelling is expected to start in 2026, with the world’s leading companies already expressing strong interest in being part of this transformational project.

This package of works will also include safety cross passages between the tunnels, station boxes at Clayton and Monash, and tunnel entrances and exits at the stabling facility. Cross passages will be excavated via the constructed tunnels using small or remote-controlled excavators.

Melbourne’s topography presents some engineering challenges, with highly variable ground conditions and groundwater levels along the proposed route. Slurry and EPB TBMs may be suitable for different sections. South of Monash, conditions are predominantly clay and sandy, and to the north, mostly sedimentary rock.

Building SRL East as twin tunnels also reduces the volume of rock and soil needed to be removed. Much of the spoil will be able to be reused for rehabilitating quarries or on other construction projects.

With 26kms of twin tunnels for SRL East, the shortest TBM drive will be the 2.6kms between Monash and Clayton, and the longest section a whopping 6kms between Burwood and Glen Waverley. The longest TBM drive for the Metro Tunnel project was 1.8kms. 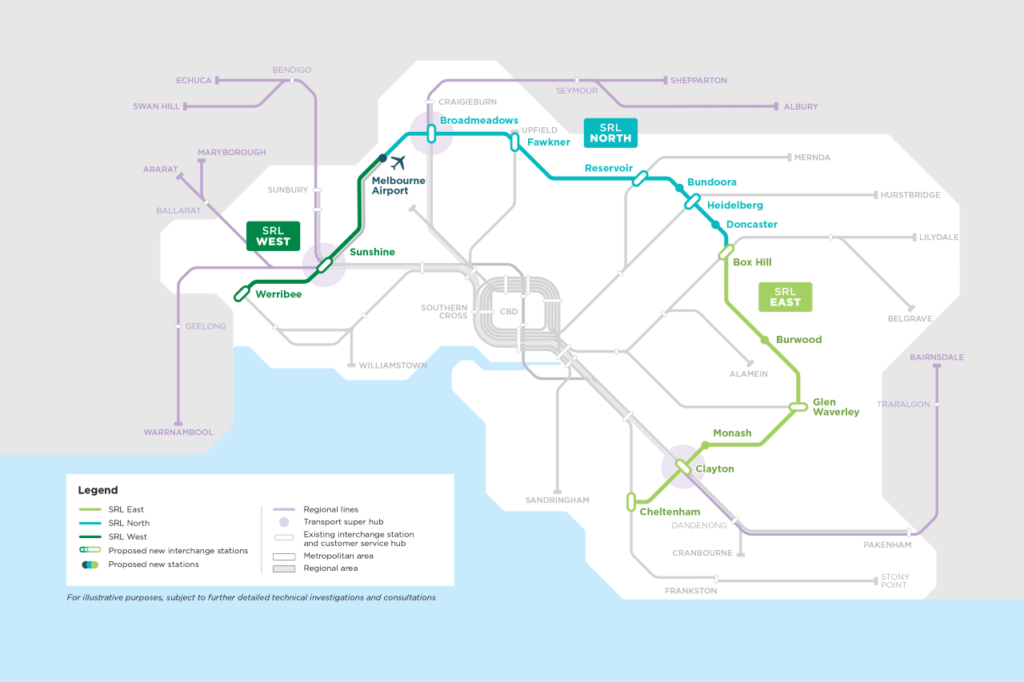