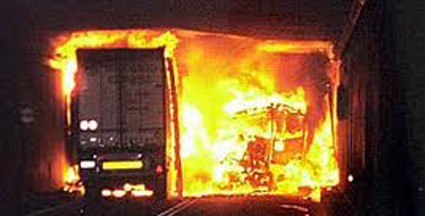 The EuroTAP 2010 results of inspections conducted this spring in 26 major tunnels in 13 European countries indicate that an alarming number of operational tunnels across Europe will not be ready to comply with EU tunnel safety rules when they come into effect in 2014.

“We can see indications that some Member States will have an obvious problem to comply with the deadlines set by the EU Tunnel Directive by 2014, 2019 respectively” said Wil Botman, Director General of the FIA European Bureau. “It is necessary to speed up the process of refurbishment of tunnels already in operation in order to meet requirements of the Directive and to improve the safety of all motorists.”

Inadequate breathing equipment for fire fighters, a major shortcoming in half of all tunnels would make rescues in thick smoke impossible. Similarly, the frequently noted lack of tunnel loudspeakers makes warnings about accidents to drivers entering or already in the tunnel impossible. Missing hydrants and information displays at portals, no barriers to close the tunnel, dark tunnel walls and insufficient escape route signs were among the most common deficiencies. 19% of tunnels lack appropriate lighting and in- tunnel traffic radio reception – conditions all motorists expect to function.

With motorisation across Europe expected to increase and not just in peak holiday periods, roads and tunnels will have to bear increasing daily volumes of vehicles and increased risks of accidents. To tackle the unacceptable numbers of road deaths (35,000) and road injuries (1.5 million) in 2009, the EU’s Road Safety Programme 2011-2020 adopted last week specifies that European funds will only be granted to infrastructure complying with road and tunnel safety directives.

This year’s results show the state of Europe’s tunnel infrastructure at its most sublime and most depressing quality. In last place out of the 26 tested tunnels is Iceland’s Hvalfjörður tunnel. For this EU candidate country, EuroTAP can serve as a benchmark in its efforts to become an EU member and comply with EU legislation. At the other end of the test results scale stands the Duplex Tunnel in France. Located near Paris, this exemplary and innovative ‘double-deck’ tunnel with cross connections and additional escape and rescue routes every 200 m, offers the full range of safety features that other operators should target.

For detailed results of the tunnel test 2010 and for automobile clubs contact details visit:

The UK’s National Highways has announced its Preferred Bidder for the £1.25bn contract for the tunnel and main construction work…