Home > Evergreen gears up for launch

Evergreen gears up for launch 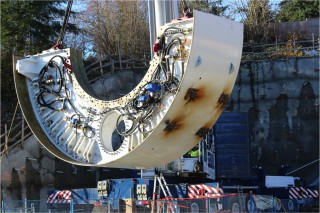 The first elements of the 9.84m (32.3ft) diameter Caterpillar mixed face EPBM, which will be used to excavate the 2km (1.25-mile) long bored tunnel section of the new Evergreen LRT Line, have now begun to arrive at the project’s TBM launch site on the west side of the Barnet Highway, in Port Moody, Vancouver, Canada. Assembly will take a couple of months.

The TBM is expected to commence excavation in February 2014, traversing geology comprising tills and glacial deposits, including boulders with maximum UCS of 350MPa. The machine has been designed to withstand pressures of up to 6 bars.

The project will link the cities of Burnaby, Port Moody and Coquitlam with an 11km (6.8-mile) advanced light rapid transit line between Lougheed Town Centre in Burnaby and Douglas College in Coquitlam. The components of the project include elevated and at-grade guideways, the 2km (1.25-mile) long tunnel, seven stations, power substations, train operating systems, parking facilities, and a vehicle storage and light maintenance facility.