On March 7, British Columbia Premier, Christy Clark, was joined by the Honourable James Moore, Minister Responsible for British Columbia and Member of Parliament for Port Moody-Westwood-Port Coquitlam, BC’s Transportation and Infrastructure Minister Todd Stone, and TransLink Board Chair Marcella Szel, in announcing the start of Evergreen Line tunnel construction and officially naming the TBM.
The 9.84m (32.3ft) diameter Caterpillar mixed face EPB machine has been named “Alice”, after Alice Wilson who became the first woman to hold a professional position at the Geological Survey of Canada, in 1911. The machine will be used to excavate a single 2km (1.25-mile) long bored tunnel for Vancouver’s Evergreen LRT Line.

Running east from the project work site at Barnet Highway, in Port Moody, to south of Kemsley Avenue, in Coquitlam, the TBM will traverse geology comprising tills and glacial deposits, including boulders with maximum UCS of 350MPa. The machine has been designed to withstand pressures of up to 6 bars.

“Our Government is pleased to invest in this project that will create jobs and boost the regional economy,” said Minister Moore. “The Evergreen Line will not only provide Metro Vancouver residents with an expanded, efficient and environmentally sustainable transit system, it will connect communities and improve the quality of life for all residents of the region.”

“With today’s christening we can start to create the longest rapid transit system in Canada,” said Premier Clark. “We promised to open the line by summer 2016, create 8,000 jobs, and give families and communities the transportation choices they need – and we’re delivering.” 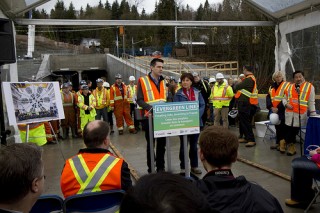 “Metro Vancouver has a world-class transportation network,” said Stone. “The Evergreen Line is the largest transit project underway in Metro Vancouver today, and it will help meet the demands of a growing population bringing rapid transit for the first time to the communities of Port Moody and Coquitlam. Once the Evergreen Line is complete, B.C. will have the longest rapid transit network in Canada at 79 km in length.”