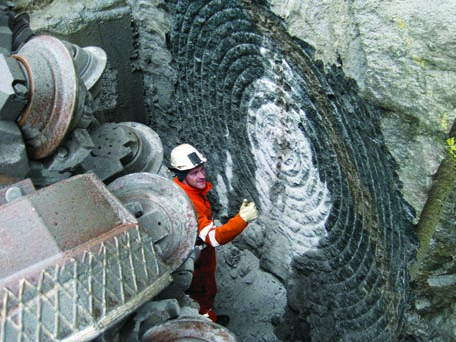 The first and only TBM to have been used to date on the Faroe Islands was re-launched in mid September and is currently several hundred meters into its new 8.4km long collector tunnel drive as part of the Eidi II Hydropower Project on Eysturoy Island. The Robbins 3.35m diameter Main Beam TBM has constructed some 25km of tunnel since being bought and transported to the Faroes in 1984 for use on the original Eidi Hydropower Project.

The latest project, known as Eidi II, is part of a new green energy initiative by the utility agency for the Faroes: Streymoy, Eysturoy and Vágoy (SEV). The tunnel, being bored through basalts by Danish and Faroese contractors MT Hojgaard and J&K Petersen, will collect water from 25 streams, increasing the annual capacity of the plant from about 43GWh to about 60GWh.

Prior to startup, the SEV-owned machine underwent some refurbishment to the gearboxes, main bearing, lube system, and hydraulic hoses.

“Prior to starting up this project, we contacted Robbins for an assessment. We got an immediate response, and two men were sent to inspect the machine. They concluded it was in good condition following the upgrades,” said Anders Nedergaard-Hansen, Head of the Power Production Department for SEV.

“We are looking into using the machine for additional projects in the next five to ten years. The TBM was well built by Robbins, and we have done a good job maintaining it,” said Nedergaard-Hansen.

Tunneling at Eidi II is expected to be complete in March 2013, and the newly expanded plant commissioned later that year.

The Faroe Islands is a collection of 18 windswept islands in the North Atlantic, and home to nearly 48,000 people. Situated between Iceland and Norway, the mountainous islands receive an average of 250 days of rainfall annually, creating significant runoff. These features make the islands ideal for small hydropower plants utilizing collector tunnels to transport rainwater.