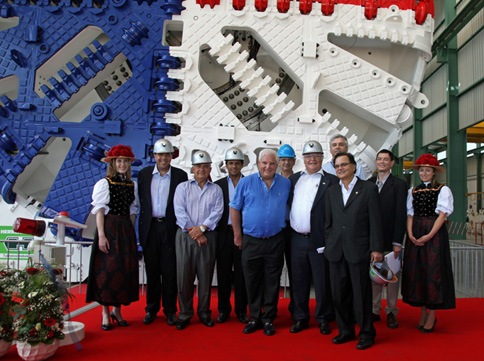 The FCC-led consortium responsible for completing the 7km long Line 1 of the Panama Metro has taken delivery of its two 10m diameter TBMs for the works, at a ceremony in the German town of Schwanau. Ricardo Martinelli, the President of the Republic of Panama, attended the event. The TBMs, built by Herrenknecht AG, will arrive in Panama separately, in October and November.

The project, which was awarded to a consortium comprising FCC and Brazilian company Odebrecht, has a budget of over US$1.42bn.

The TBMs are equipped with cutting-edge technology and include complementary equipment such as locomotives, conveyor belts, rails, spares, maintenance equipment, cabling, and cutting tools. The agreement includes transport to Panama and assembly of the TBMs.

At the delivery ceremony, held at Herrenknecht AG’s hangars, Mr Martinelli announced the tender for line 2 of Panama Metro: “We are going to transform the former transport chaos in Panama into a safe, reliable system for all citizens.”

The Panama Metro line 1 contract adds to FCC’s extensive experience in subway building worldwide. FCC Construction has participated in the construction of the Lisbon Metro (Alameda-Expo section) and in the extension of line 2 of Athens Metro, as well as the construction of new stations there (Periteri and Anthoupoli).

Through Alpine, its Austrian subsidiary, FCC is currently building the metro line between New Delhi and Indira Gandhi International Airport and two new sections of the Singapore Metro.

The company was recently awarded the contract to build the Toronto-York Spadina Subway Extension (TYSSE) in Canada, which includes construction of the North tunnels and the Highway 407 Station and is worth 304 million euro, and section 1 of Bucharest Metro’s line 5 (Romania), for 267 million euro.

FCC also built extensions to Madrid Metro, including line 10, line 8 (Barajas-T4), and line 3 (from Legazpi to Villaverde), as well as sections I and III of Metrosur. In Barcelona, the company built several sections of metro lines 2, 5 and 9. It is currently building the metro in Málaga and section 1 of Barcelona Metro’s line 9.