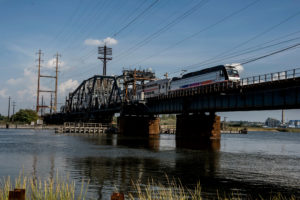 On February 10, The Trump administration announced that the Gateway Portal North Bridge project, a $1.7 billion replacement for New Jersey’s Hackensack River bridge (one of the two main components of the proposed Gateway project), has been given a “medium-high” rating by the Federal Transit Administration (FTA) and is now eligible to receive federal funding, while again ruling that the related Hudson River rail tunnel had not met the criteria required to receive grant money.

Both projects have faced a series of setbacks under Trump’s administration, which abandoned an Obama-era agreement to split the cost of the work with the states of New York and New Jersey. The resulting delays in federal funding – and in issuing permits to start work on the proposed tunnel – have left Amtrak riders and New Jersey commuters contending with frequent break-downs caused by the existing, century-old bridge and tunnels. Both two-track crossings are lynchpins in the Northeast Corridor, the busiest stretch of railroad in the Northern Hemisphere, and carry more than 450 trains and some 200,000 passengers daily.

However, the FTA again issued a “medium-low” rating for the $12.1 billion tunnel project, still making it ineligible for federal funding – even if lawmakers can negotiate a budget that provides more money to the project.

In August, the tunnel’s backers – New Jersey, New York and Amtrak, led by the bi-state Port Authority – submitted a revised application they said addresses many of the problems raised in a rating released last March. Thanks to what developers describe as more refined engineering, the estimated cost of rehabilitating the existing tunnel and constructing the new one dropped from $13.7 billion to $12.1 billion.

The states also passed legislation last year creating the Gateway Development Commission, addressing a complaint by federal officials that the project had not previously had a sponsor. The Port Authority is temporarily filling that role.

The total requested federal grant fell from $6.8 billion to $5.3 billion, reducing the share from 49.4 percent to just 44 percent. Still, the FTA said the project did not meet funding requirements because its financial plan is rated “low.”

The agency faulted the application for, among other things, relying on “planned or unspecified” funding sources. That primarily includes the use of federal loans from the Railroad Rehabilitation and Improvement Financing program — a large, untapped pot of money designed specifically to support major railroad projects like Gateway.