Femern A/S, client body for the 18km long Fehmarnbelt immersed tube tunnel linking Germany and Denmark, is activating the main construction contracts with Femern Link Contractors (FLC) with effect from 1 January 2021. This means that construction of the large scale tunnel element factory at Rødbyhavn can get underway. 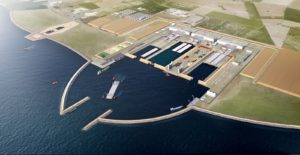 November 2019 saw the start of the main construction phase of the Fehmarnbelt tunnel when the contract with the Dutch contractor consortium, Fehmarn Belt Contractors (FBC), for the new work harbour at Rødbyhavn came into force. The harbour is expected to be completed by the end of 2021. Moreover, in March 2020, the EU Commission approved the financing model for the entire Fehmarnbelt project.

The tunnel element factory will be one of the biggest factories in Denmark and the overall construction site will be the largest of its type in Northern Europe.

Activation of the contracts is, of course, being carried out with due respect for the ongoing German approval process of the Fehmarnbelt project.

In February 2019, Femern A/S received the signed approval from the authorities in Schles-wig-Holstein. The German Federal Administrative Court is currently processing the com-plaints about the approval and the court has set dates for the final hearings in the autumn of 2020.

Femern A/S is already engaged in a number of construction site preparation activities for the tunnel on the German side at Puttgarden in order that further progress can be made when the German legal proceedings allow.

“This is truly a great day for the Fehmarn tunnel project. The main stages of the construction phase will now commence,” says CEO Claus F. Baunkjær, Femern A/S.

Webuild, as part of the Spark consortium, has signed a contract that values its stake at AU$3.3bn (€2.1bn) in the North…