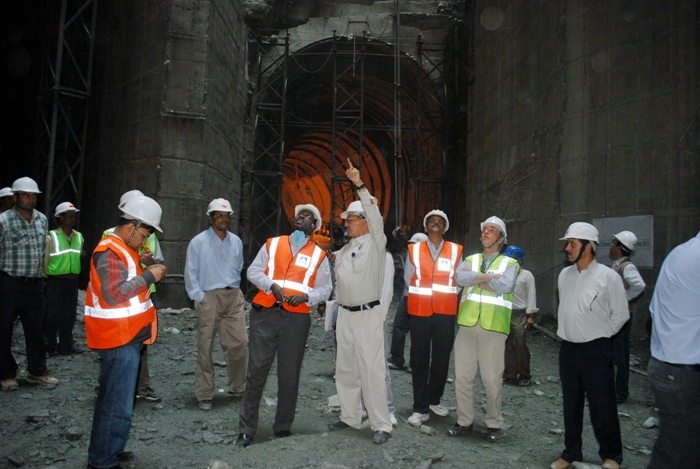 Drill and blast excavation was completed on the Rampur Hydro Electric Project on Tuesday, July 24, when engineers of SJVN Ltd (formerly Sutlej Jal Vidyut Nigam Limited) made the final breakthrough on a 15km long, 10.5m diameter, underground Head Race Tunnel (HRT) for the 412MW project, which is located on River Satluj, a major tributary of Indus basin, in Shimla and Kullu district of Himachal Pradesh, North India.

The breakthrough was accomplished within a face of very poor rock conditions that have proved a challenge on the project. The tunnel now stands fully connected, while 57% of concrete lining and 80% of tunnel benching has also been achieved.

The Rampur Hydro Electric Project is designed as a cascade run of the river plant to India’s largest hydroelectric power plant, the 1500MW Nathpa Jhakri plant. RP Singh, Chairman and Managing Director of SJVN Limited, said that the first generating unit will be boxed up by December 2012 with the project scheduled for commissioning in September 2013.

Construction works for other major components of the project are in full swing and will also be completed on schedule. While complete concrete lining of the 165m high x 38m diameter surge shaft has been achieved, penstock erection, concreting works at the powerhouse and concreting at the valve house remain in progress, Singh added.

Construction of Rampur Project began in January 2007. Prior to beginning excavation on the headrace tunnel, numerous geological surveys were undertaken. These surveys had provided a predicted a ratio of 65:35 of hard (good quality) and soft (bad quality) rock along the tunnel alignment. During tunnelling however, layers of bad quality rock (20:80) were encountered in one particular section of the alignment, leaving engineers struggling to find more efficient support solutions as production targets began to slip.

To bring the project back on track, a length of tunnel adit – where rock conditions were particularly bad – was curtailed and lattice girders were introduced in place of conventional steel ribs to provide a more flexible support system. The introduction of an additional tunnel construction adit also provided two further working faces, reducing predicted delays by two years and bringing the project back on schedule for commissioning next September.

While the additional access adit had begun to provide positive results, a major cavity was then encountered while traversing a fault deep inside the mountain, putting engineers and projects planners through another difficult test. The unstable cavity posed a particular challenge as available heavy machinery could not be deployed and controlled blasting was of no help.

When two attempts to advance the tunnel through this section failed, the decision was taken to bypass the cavity and consultants were brought in to formulate a strategy to backfill the area with concrete. Falling back on a time tested multi-drift tunnel execution method, work resumed. However, it took about 15 months to clear the 25m stretch of tunnel construction in this troubled zone. Elsewhere, where good quality hard rock was encountered, tunnelling progressed at a brisk pace of 150m-175m per month.

The Rampur Project is backed by the World Bank and involves financing of the project on a 70:30 debt-equity ratio basis. The estimated cost of the project at March, 2006 price levels was Rs 2047.03 crores.