The final breakthrough on Austria’s 33km long Koralm Tunnel has been celebrated. PORR is building the third construction lot “KAT3” that involves the construction of twin north and south tubes, with a combined length of 21km. The contract on this major railway project is worth €297M. 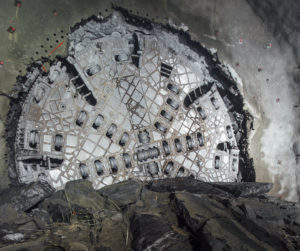 For Lot KAT3, while conventional drill-and-blast and excavation methods were used to drive the south tunnel, where breakthrough was achieved back in 2018, a Herrenknecht 9.94m diameter Multi-mode TBM named “KORA” was deployed on a total 11,974m of the north tunnel.

Geologically, the KAT3 Koralm tunnel is divided into different zones, which dictated the TBM’s different modes of boring:

The mountain section of the neogene, up to 4,444m in length, (sedimentary rock and the main Lavanttal fault zone) were excavated in EPB mode. After completion of the EPB section, and following TBM conversion, the remaining 7,530m was driven from June 2018 in hard rock mode with a muck ring conveyor and belt discharge.

The tunnels feature an 8.8m i.d. 6+1 segmental lining, with an excavation diameter of 9.5m. There are cross passages between the two tubes, driven parallel to works on the south tunnel at intervals of 500m.

With a length of around 33km, the Koralm Railway is Austria’s longest rail tunnel and one of the most extensive tunnel construction projects in the world. “We are extremely proud to be part of this once-in-a-century project and to be able to demonstrate PORR’s expertise in civil engineering, infrastructure and tunnelling. The tunnel breakthrough is a key milestone and a special moment for everyone involved in the project,” said Karl-Heinz Strauss, CEO of PORR.

The Koralm Railway is a key project in the Baltic-Adriatic Corridor and links the up-and-coming economic areas on the Baltic Sea with the Adriatic region and will make travel possible from Graz to Klagenfurt in just 45 minutes.

The high-speed rail link will yield new capacities and significantly improve conditions for the transport of people and goods. “The Southern Line is one of the biggest and most spectacular infrastructure projects of Austria. The final breakthrough of Koralm Tunnel is a unique achievement and we are very proud of all miners, men and women who participated to make this historic project possible,” said Andreas Matthä, CEO of ÖBB.

Facts and figures at a glance