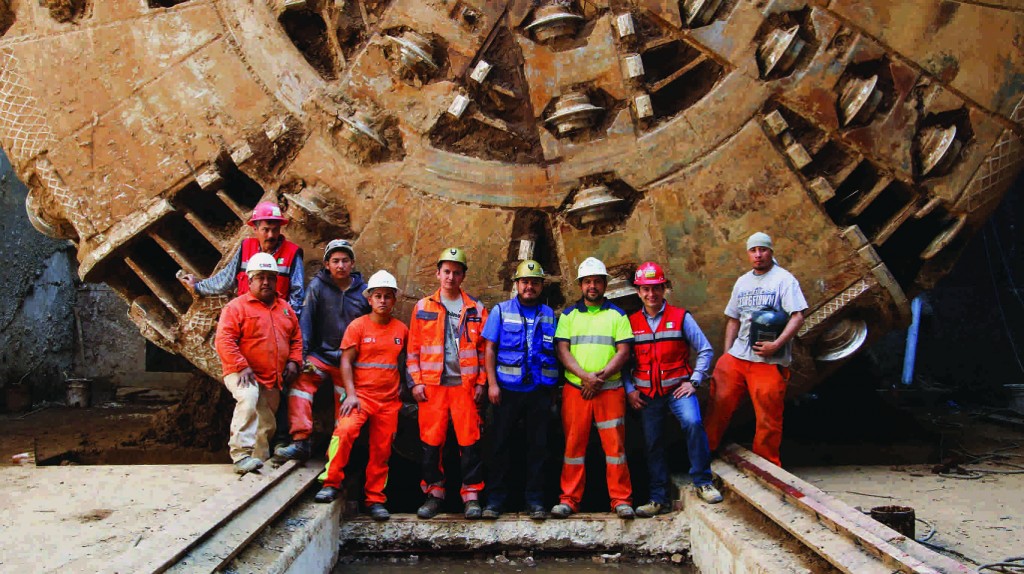 The TBM, known an XRE, a Crossover (X) between Rock (R) and EPB (E) TBMs, navigated fault zones, variable ground, low cover, and more to achieve a national record of 57m in one day as well as maximum rates of 231m in one week and 702m in one month.
“The XRE has a great advantage as it is designed to work in open and/or closed mode (EPB); allowing it to excavate the tunnel either in soil or in rock. We’ve verified that its performance was very efficient,” said Ing. Juan Alberto Herrera Moro y Castillo, TEP II Section Chief for owner CONAGUA, Mexico’s National Water Commission.
The unique machine and its Robbins continuous conveyor system were built on location using Onsite First Time Assembly (OFTA), and designed for a contractor consortium of Aldesem, Proacon, and Recsa. The Robbins XRE TBM featured components like a convertible cutterhead with interchangeable cutting tools, interchangeable TBM belt conveyor and screw conveyor, and multi-speed gearboxes to increase torque for tunneling through difficult ground. “The benefits of the design are in its exceptional thrust power and in the ease of changing the cutterhead torque. This makes the process much easier should the machine become stuck in difficult ground,” said Alberto Martinez, head of the tunneling department for RECSA.
The XRE machine was launched in August 2015 to bore the 5.8km long wastewater tunnel. The machine was set up in a hard rock configuration and mounted with 20-inch diameter disc cutters. Early in 2016 the TBM hit the first of several contact zones, a 30m wide fault of fractured and blocky rock. While the excavation through the contact zone was slow going, progress picked up again in the more competent andesite rock. After an intermediate breakthrough in March 2016 into an 80m deep shaft followed by inspection and maintenance, the TBM continued on.

While boring in fractured andesite rock in autumn 2016, the TBM encountered a naturally occurring cavern believed to be the result of either a rock fall in a transition zone, or an old, underground lake body that had eroded the rock away. The cavern was estimated at 90 cubic meters in size, including about 57 cubic meters of unstable floor area. The TBM was stopped and immediate measures were taken to stabilize the ground in front of the machine with polyurethane foam before filling the cavern with a mixture of pea gravel and grout.

By the end of October 2016, the TBM had reached a final 900m long section of soft ground, where it was converted to EPB mode. In this final reach of tunnel with low cover, the distance from the top of the tunnel to residential home foundations was as low as 4m and the ground had the consistency of reconsolidated soil. In order to stabilize the soft soils and minimize the risk of settlement below the residential area, the tunneling crew drilled from the surface and installed 890 micro-piles at 1m intervals.  “We were able to do this without causing damage to property owned by neighbors in the zone bordering the path of TEP II, or to the road or the urban infrastructure installed in that area,” explained Ing. Francisco Miguel Lopez, Jobsite Manager TEP II for contractor Aldesa.
Now that tunneling is complete, the tunnel will receive a secondary concrete lining of 35cm thickness before going into service. The wastewater tunnel will overhaul the current system in western areas outside of Mexico City and serve to prevent recurrent flooding in Valle Dorado. In particular, the tunnel will benefit the cities of Cuautital Izcalli, Tlalnepantla, and Atizapan de Zaragoza, which altogether are home to 2.1 million inhabitants.