Webuild and its Swiss subsidiary CSC Costruzioni successfully completed the test run of a robot called AXEL (Autonomous Exploration Electrified Vehicle), a prototype based on avantgarde technology to improve the safety of workers involved in the excavation of the Turin-Lyon base tunnel.

The innovative, remote-controlled robot is a world first, able to inspect the atmospheric conditions of a tunnel where potential risks are unknown. AXEL is the result of a collaboration between the Webuild Group and a research centre called Competence Industry Manufacturing 4.0 (CIM). Its purpose was to conduct a preliminary inspection of a tunnel at the “Nicchie La Maddalena” construction site on the Italian side of the planned base tunnel between the two cities. It is an example of how innovation is applied to robotics so as to increase safety for workers in the infrastructure sector. 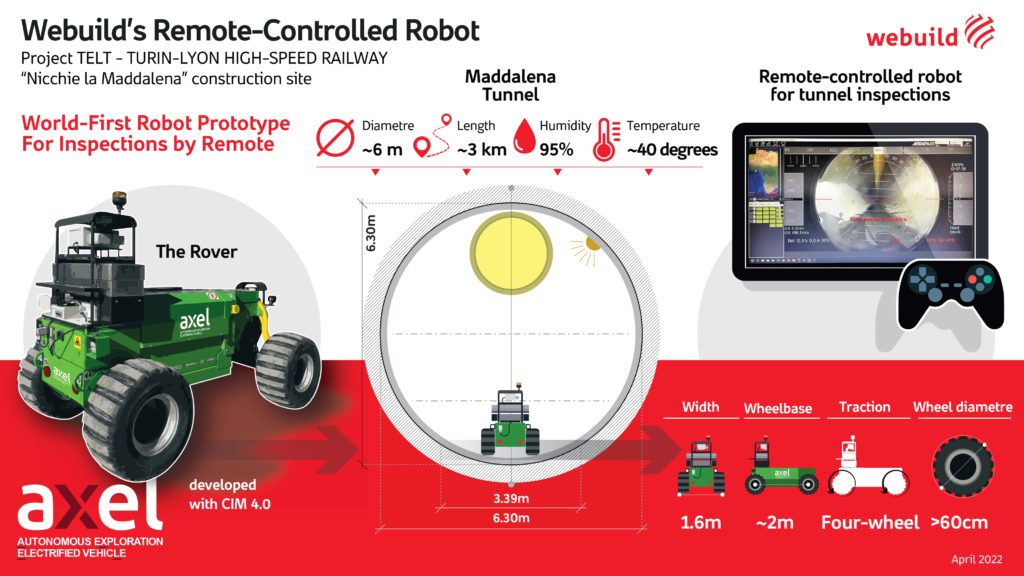 Commissioned by TELT (Tunnel Euralpin Lyon Turin), the binational public entity responsible for the development and management of a high-speed/high-capacity railway to be built under the Alps between Turin and Lyon, the site of the Nicchie La Maddalena required the inspection of 3km of a diagnostic, or exploratory, tunnel to ensure that the unknown atmospheric conditions were safe for workers. The inspection was conducted by AXEL, named after the main character r in the novel “Journey to the Centre of the Earth” written by Jules Verne.

AXEL is the first example in Italy of the use of robotics to explore a tunnel at the site of a planned railway. It allowed for the gathering and analysis of data on the atmosphere to identify the areas where workers can work in safety. It can be controlled remotely for up to two kilometres. Equipped with telecameras, sensors, communication antennas, the robot guarantees a high level of reliability as it operates under harsh environmental conditions. Powered by a battery, it produces no emissions.

AXEL is just the latest example of applied research to be deployed by Webuild, which approaches every project and construction site as an opportunity for innovation, especially in terms of worker safety, environmental sustainability and efficiency.

The work to be done at the Nicchie La Maddalena site is part of the preparations for the excavation of the base tunnel, which will be 65km long. By encouraging travel on rail rather than road, the railway will help avoid three million tonnes of CO2 emissions each year. It will be part of the high-speed/high-capacity railway that will connect Paris and Milan. It is part of the Mediterranean Corridor of the Trans-European Transport Network (TEN-T), the ambitious European Union initiative for sustainable mobility to connect the region’s railway networks and increase the transport goods by rail rather than by road.