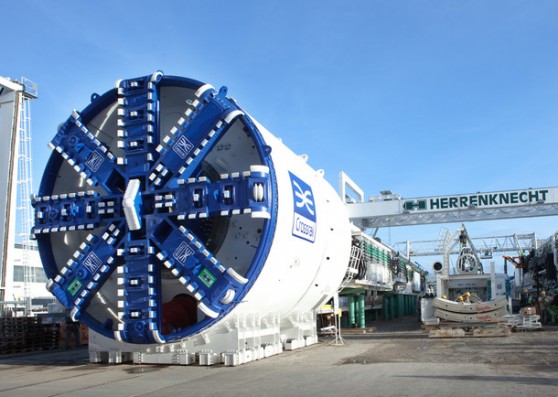 Crossrail has unveiled the first its eight, 1,000 tonne Herrenknecht TBMs that will construct the 21km of twin-bore tunnels for the cross-city link under central London. The 140m long, fully assembled TBM is currently undergoing factory testing at the Herrenknecht facility in Germany. The machine will shortly be dismantled and shipped to London where it will be re-assembled at Westbourne Park ahead of tunnelling commencing from Royal Oak in March.

The eight TBMs will be required to undertake ten individual tunnel drives to construct the project’s 6.2m diameter tunnels. The machines will run 24 hours a day, 7 days a week stopping only for scheduled maintenance.

Construction of the concrete segment factory for the western running tunnels between Royal Oak and Farringdon is now complete at Old Oak Common. The plant will begin manufacturing over 70,000 segments for the western tunnels from January.

Chris Dulake, Crossrail’s Chief Engineer said: “Crossrail tunnelling will get underway in March 2012 when the first of eight tunnel boring machines will begin burrowing below the streets of London. Work is continuing across the Crossrail route to prepare for construction of the major new rail tunnels. The new Tunnelling and Underground Construction Academy has welcomed its first students and will train at least 3,500 people with the skills required to work below ground while the first of the tunnel segment manufacturing plants will shortly commence full operations.”