The first of two Herrenknecht 9.15m diameter TBMs involved in the construction of Milan’s M4 metro line central section has reached the end of its journey with the breakthrough into the wall of the site of the future Solari underground station. 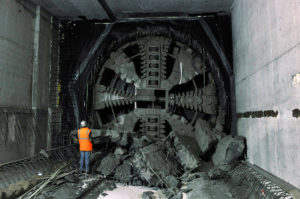 With the second TBMs arrival a few days away, the machines have together excavated 620,000 cubic metres of earth along 9.2km for the line’s two parallel tunnels. The project employed 1,500 people, who were able to work during the COVID-19 lockdown thanks to the safety measures deployed on site. Work on this strategic project for sustainable mobility led by the Webuild Group proceeds unabated in order to open the first section of the line between the Linate city airport and Forlanini FS station in the spring of 2021.

Commissioned by the City of Milan, the line is being built by mixed concession operator M4, which will also manage the line in which the city and a group of private partners led by Group are investors.

Attending the breakthrough at the site of the future station were Milan Mayor Giuseppe Sala; Marco Granelli, city councillor in charge of mobility; Webuild General Manager Massimo Ferrari; M4 SpA President Fabio Terragni; and Webuild’s Guido Mannella, head of the consortium of builders, CMM4. After the arrival of the second TBM in the coming days, both machines will be dismantled. The rails will then begin to be placed along the floor of the two tunnels, along with the installation of the electric power supply system and computer guidance system.

The excavation work, which reached a monthly production record of 540m, operated in a complex geological and geo-technical context.

The complete line will be 15km long with 21 stations, split into three sections excavated using six Herrenknecht TBMs, the two 9.15m diameter machines mentioned above in the Central section (Tricolore-solari Park station), and two with a smaller diameter of 6.36m, for the eastern section (Line-Tricolore station). The last two machines with a diameter of 6.7m, are being used in the western section (Parco Solari-San Cristoforo FS station).

Line M4 will link the eastern part of the city where the Linate city airport is located with the San Cristoforo FS station to the southwest. Its intermodal connections with other lines will expand the city’s network of public transport to improve the environment and Milan more sustainable, taking some 16 million vehicles off the streets every year and reducing CO2 emissions by 30,000 tonnes a year.

Milan’s M4 metro line is the latest example of Progetto Italia, the Group’s initiative to help restart projects in Italy. Work on the project, begun by Salini Impregilo and Astaldi before they came together to create the Webuild Group, is proceeding in full respect of the deadline set by the client, maintaining a close rapport with the public institutions to guarantee employment on site and along the supply chain.