Parts of the first of three TBMs have arrived at the site where Webuild and its joint-venture partners are building Snowy 2.0, the largest renewable energy project in Australia that will expand Snowy Hydro Limited’s network of hydro power stations and support the country’s transition to a low-carbon emissions future. 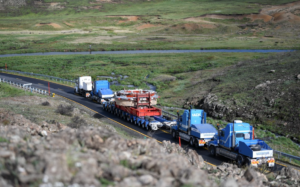 Measuring 137m in length and 11m in diameter, the TBM will use its unique ability to operate at a descendent of 9% to excavate a tunnel for 2,660m to where a cavern will be dug to house the power plant.

Loaded on long trailers hauled by heavy trucks from Port Kembla, the first shipments of the TBM components – the front shield, gear ring probe drill and main seal – has passed through the town of Cooma in the Snowy Mountains to arrive at Lobs Hole, where excavation of the Main Access Tunnel is to begin.

The Main Drive, the TBM’s heaviest component at 174 tonnes, has also been delivered to the site.

Webuild, leader of the Future Generation joint-venture with its U.S. subsidiary Lane Construction and local partner Clough, will also excavate the waterways, access tunnels and other supporting infrastructure with the other two TBMs, which are to arrive on site in the coming months.

It is also building access roads, camp accommodation for workers and has excavated the main access tunnel portal in the Snowy Mountains. In Cooma, it is building a a pre-cast factory and bathing plant to produce 130,500 concrete segments that will line the 40km of tunnels to be excavated.

More than 500 people and 100 local businesses are currently involved in the project, with about 4,000 jobs expected to be created during the life of the project. There is also the potential for many more jobs to be created in the region through supply chains and support services.

Set in the Snowy Mountains, Snowy 2.0 will provide an additional 2,000 megawatts of fast-start, dispatchable energy and provide 350,000 megawatt hours of large-scale storage, enough to power the equivalent of 500,000 homes for over a week during peak demand. It will reduce volatility in the market, support reliability and bring down power prices for families and businesses. The Snowy Scheme already generates about a third of the renewable energy in Australia’s National Electricity Market.

Renewable energy is part of Webuild’s focus on helping clients achieve Sustainable Development Goals set by the United Nations. More than half of the new orders it acquired in 2019 were related to hydro power. As the first source of renewable energy in the world, hydro power is responsible for 71% of all the energy produced by renewable sources.

Webuild’s current projects provide clean energy to millions of people throughout the world while avoiding harmful emissions by about 14.5 million tonnes of CO2 a year.