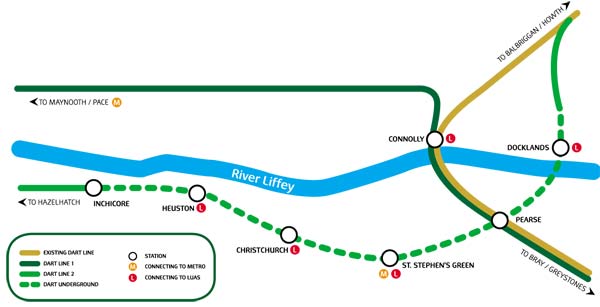 Iarnród Éireann (Irish Railways) has announced that four international consortia have reached the pre-qualification phase for the PPP procurement process for Dublin’s US$3.3bn DART Underground project. The scheme includes the construction of 7.4km of twin-tube tunnel bored by two TBMs, 25m deep under Dublin city centre. The consortia are:

Iarnród Éireann will now commence the assessment process, which will be completed over the coming months. The project has also submitted a Railway Order application on 30th June. The project intends to have the PPPCo contract awarded by mid 2012 and construction completed and passenger services commenced through the tunnel by end of 2018.

DART Underground will connect the Northern and Kildare rail lines, with underground stations at Spencer Dock, Pearse, St. Stephen’s Green, Christchurch and Heuston as well as a new surface station at Inchicore.

Under the PPP contract the successful private partner will be responsible for the design, construction, financing, commissioning and maintenance of the tunnel, stations and associated facilities over the period of the PPP contract.

At this stage, the contract is envisaged to last for between 25 and 35 years, including the design and construction stages. In return the private partner will receive an annual availability and performance based payment.

Iarnród Éireann will at all times retain responsibility for the operation of DART services through the tunnel, which will be handed back to Iarnród Éireann at the end of the concession period.

It is the latest boost for commuters who will benefit from DART Underground, with the project having been confirmed in the Government’s Capital Investment Programme last week. DART Underground will also provide an important stimulus for the economy, on the employment side alone creating up to 7,000 jobs during each year of construction and thousands more indirectly as a result of the significantly improved access that the project will deliver to retail, commercial, leisure and tourist destinations in Dublin.