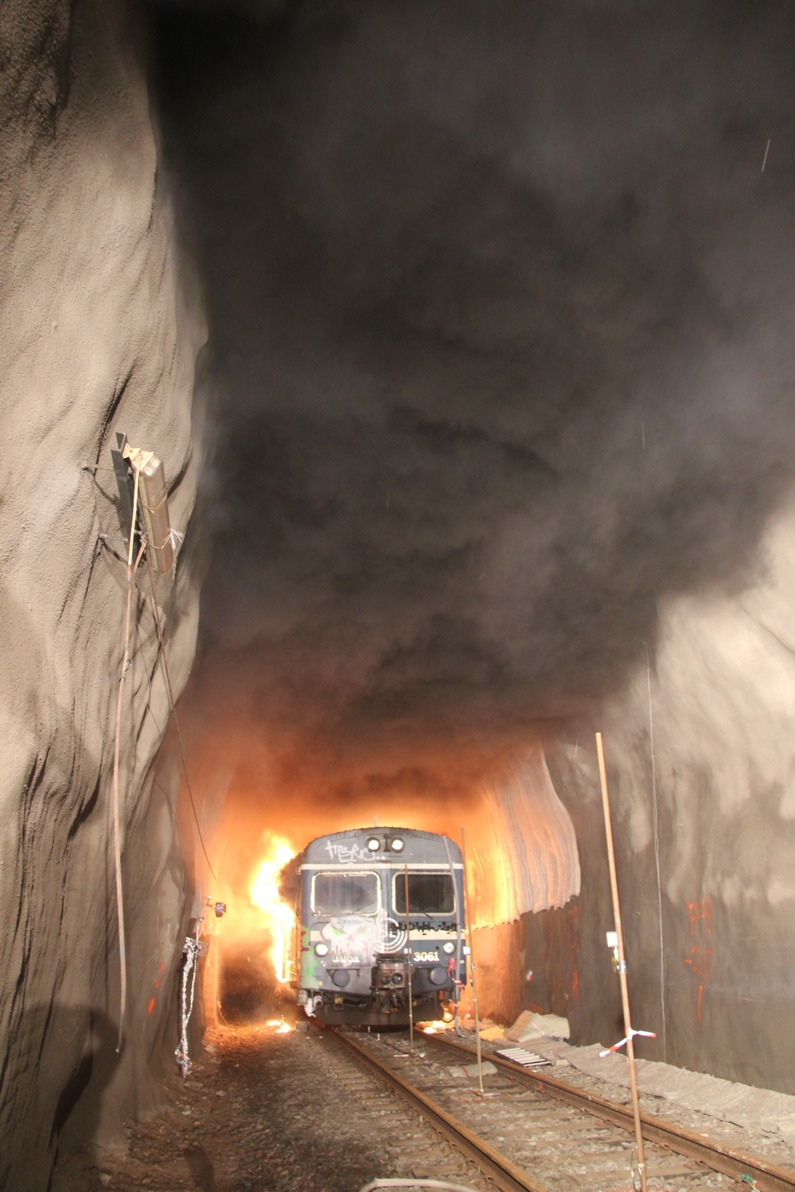 The METRO project aims to conduct comprehensive research to improve the safety of travel, work and rescue in underground railways. It is a wholly Swedish project being run over a period of three years, ending in 2012. As part of the METRO research project, SP Fire Technology is performing unique full scale fire tests in commuter train carriages in a tunnel in Sweden.

With a total budget for the project amounts to over SEK 14 million, the METRO project is unique in Sweden studying the fire performance of underground public transport.  The Project is run by a Consortium consisting of Mälardalen University, SP Fire Technology, Lund University, the Greater Stockholm Fire Service, Stockholm Public Transport, FOI Swedish Defence Research Agency, CRISMART (the Swedish National Defence College), the Swedish Fortifications Agency and the University of Gävle.

SP Fire Technology is responsible for the study of design fires.  The work includes comparison of the results of tests at various reduced scales with those of full scale tests in a railway tunnel as the climax of the work.  The project has access to three commuter train carriages, and the main purpose of the tests is to investigate how a fire develops, and what the consequences are of an explosion, in a carriage.  Full scale tests will be performed in the old Brunsberg tunnel between Kil and Arvika in the western part of Sweden.  The abandoned tunnel is 276 m long, lying on a siding about 1 km long.

Performing full scale fire tests such as these requires major resources, and so data acquisition will be comprehensive.  We intend to measure gas temperatures at a large number of positions, heat release rates, gas concentrations and smoke inside the carriage and in the tunnel, radiant heat fluxes and gas velocities.  The tests will also be filmed from several different positions, using both traditional video cameras and infrared cameras.  Fire and rescue personnel from Greater Stockholm, Arvika and Höga Kusten-Ådalen will be involved, to study incident tactics and thermal loads to which personnel will be exposed during such an incident.

Large scale tests like those planned in Brunsberg attrack a significant amount of attention. However, fire tests in tunnels present risks, particularly when the tunnel is close to an in-service railway track as in this case.  To minimise the risks, it will be necessary to restrict access to the tunnel during the tests.  Therefore a seminar is planned for the 13-14th September to provide information concerning the tests without endangering stakeholders.  The theme of the seminar will be fire and explosion safety in tunnel systems carrying rail traffic.  It will also be possible to visit the tunnel where the tests will be carried out on 13th September prior to the test.  Some form of direct broadcasting will be arranged to the seminar during the tests.  More information is available on the METRO project website, www.metroproject.se.