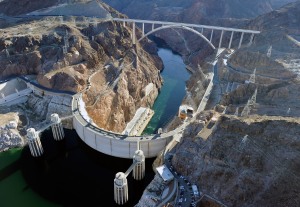 On Monday, June 11th, Southern Nevada Water Authority (SNWA) and its contractor, Vegas Tunnel Constructors (VTC), reported that at approximately 4:30pm, a fatal accident occurred at the Lake Mead Intake No. 3 Tunnel, killing one worker and injuring another.

The accident occurred 600ft (182m) below ground, while three tunnel laborers were working in the 23.4ft (7.22m) Herrenknecht Mixshield TBM erecting concrete segments, which make up the 20ft (6m) diameter, five segment + key, Universal bolted and gasketed tunnel liner ring. According to a statement released by SNWA, one of the tunnel segments was jarred loose during this process and pressurized grout was discharged, striking two of the workers.

“We have confirmed that one of the workers was fatally struck; the other suffered minor injuries,” said the statement. “This is a difficult time for our organization, the contractor and the crew. At no time were any workers trapped in the tunnel or exposed to toxic gasses. All other workers have been accounted for and are safe above ground. Furthermore, there was no flooding of the tunnel. Construction activities will not resume until the safety of the tunnel has been verified. Our minds, hearts and prayers are with the family of the deceased worker and the family of the injured worker.”

This afternoon, Tuesday, June 12th, a further SNWA statement was released, which said a special team from Vegas Tunnel Constructors – the Tunnel Rescue Team – had today descended into the tunnel and examined the site of the accident.

The VTC team determined the tunnel was safe for entry. After an initial underground investigation, OSHA concurred that VTC could proceed with activities to secure and clean the work area so the joint investigation can move forward.

“VTC is currently cleaning the space and preparing to seal the approximate four-inch by two-foot gap where the tunnel ring segment slipped forward allowing pressurized grout to force through. The concrete segment did not fall into the tunnel. The amount of material that forced through the opening was about one-half of a cubic yard with some 2-inch to 4-inch size rock mixed with grout and mud. No further material has come into the tunnel. One hundred thirty-three (133) of these concrete rings have been successfully put in place by TBM and crews, with a total of nearly 2,500 expected to complete the tunnel. All of the installed segments are stable.”

VTC is investigating how the one segment slipped forward and how to prevent such slippage from happening in the future. Tunneling activities will not resume until that determination is complete.