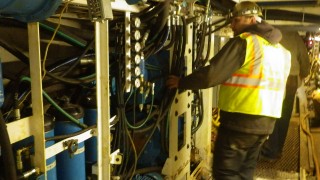 New York’s Harbor Siphon Tunnel project is set to restart in the coming months, with testing and final repairs to the project’s 12ft (3.6m) diameter Caterpillar EPBM due to take place in mid-February. The project has been on hold since October 2012, when Hurricane Sandy’s Category 1 storm surge slammed the project’s work site on Staten Island, and breached the flood defenses put in place by the contractor.

Despite Tully/OHL JV’s best efforts to mitigate the anticipated flood risks, the TBM launch shaft was inundated with seawater, flooding the tunnel just 1,500ft (460m) into its 1.8-mile (2.9km) long drive. Due to the fact that the tunnel drive is on a 2.6% downward grade, the entire TBM was submerged in saltwater requiring extensive repairs to both the TBM and the back-up.

With Caterpillar having announced the impending closure of its TBM business, Tully/OHL JV turned to Robbins to carry out the repair work. “The storm damaged everything, 99% of the electrical system needed replacing,” says Jeremy Pinkham, Robbins Field Service Manager for The Americas. The Robbins crew was contracted to guide onsite personnel in replacing corroded hydraulic- and all new electrical components, from Variable Frequency Drives to PLCs and wiring, inside the small tunnel under a water pressure of 3 bar.

“We completely replaced all of the PLCs, and since we only had limited general assembly drawings from the CAT manual, we had to work backwards to create a new program,” says Pinkham. “We had to observe the machine and how it worked to build an effective PLC system.”

Crews began reassembling the machine in November 2013, and the machine was due to be tested at the end of February. Due to the fact that the machine halted with its thrust cylinders in, certain components cannot not be replaced until the machine starts up. Therefore the plan is to turn the head and, if all goes well, mine a couple of rings before conducting the remainder of the repairs and resuming mining.

Designed by Hatch Mott MacDonald (HMM) in joint venture with CDM Smith, the new water siphon is being built between Brooklyn and Staten Island to replace existing siphons that need to be relocated to enable dredging operations for the deepening of the harbor channel.

The New York City Economic Development Corporation (NYCEDC) is managing the project on behalf of the New York City Department of Environmental Protection (NYCDEP) and the Port Authority of New York and New Jersey (PANYNJ), with LiRo/Parsons Brinckerhoff JV acting as construction manager. The project is necessary to accommodate future cargo volumes and a new generation of cargo megaships in the Port of New York and New Jersey.