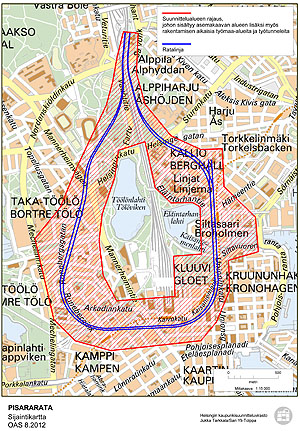 The Helsinki City Planning Department has began work on the local plan required for the proposed new rail line around the Helsinki city centre. The proposed new 7.2km long link is called Pisara (“droplet”) reflecting its shape and features 6km of twin-tube tunnels with cross passages every 200m.
The proposed three Pisara stations would be located in Hakaniemi, the city centre and Töölö. Each station would have 1-3 entrances.
The Pisara line would enable local trains to be run more frequently, easing congestion from the Railway Station to the north, benefiting rail transport on a national level.
According to plan, the Helsinki City Council will decide on the Pisara local plan in 2014. The realization of the plan also requires approval by the Finnish Transport Agency.