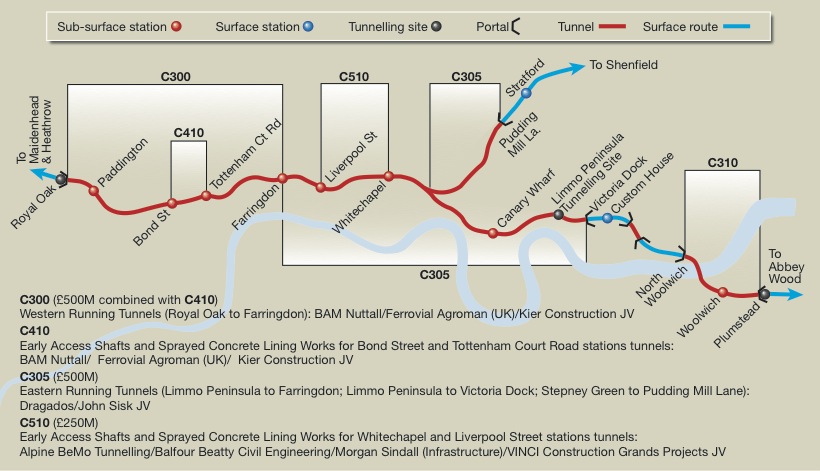 Crossrail today announced that six of the TBMs required to deliver the new rail tunnels will be manufactured by Herrenknecht AG, Germany.  Herrenknecht AG will deliver two TBMs to Royal Oak Portal for the western running tunnels in early 2012 prior to launch in Spring 2012, two more TBMs to Limmo Peninsula for the eastern running tunnels in mid 2012 and a further two machines to Stepney Green later in 2012.

To construct the 21km of twin-bored tunnel required for Crossrail, at least seven tunnel boring machines will be required and will undertake ten individual tunnel drives to construct the 6m diameter rail tunnels. Consideration is currently being given to the need for a further TBM on the short tunnel drive between Limmo Peninsula and Victoria Dock Portal (Drive G). The method of constructing this tunnel section is the subject of ongoing discussions with the tunnelling contractor.

The TBMs required for Crossrail will be up to 120m in length and weigh around 850 tonnes.

As the Thames Tunnel construction contract has only recently been awarded, the TBM manufacturer for this tunnel drive will be announced later this year.

The six TBMs will be transported to London by boat from the manufacturer’s factory in Schwanau, Germany. The specific points of arrival in the UK are yet to be agreed between the manufacturer and the tunnelling contractors. Before they depart for the UK they will be fully assembled and tested before being dismantled into sections ready for transport.

The cutterheads will arrive in sections and will be transported to the tunnel launch sites and assembled.

There will be two different types of TBM to reflect the differing ground conditions along the Crossrail route. All of the machines, except for the TBM used to construct the Thames Tunnel, will be EPBMs, which will be used for the main running tunnels between Royal Oak, Pudding Mill Lane and Victoria Dock Portal. These will pass through ground which is predominantly London clay, sand and gravels. The Thames Tunnel, which is predominantly constructed through chalk, will use a Slurry TBM.

The Mayor of London, Boris Johnson said, “There is nothing boring about the leviathan machines that will soon be burrowing their way through the earth way below our streets. These monsters of the deep will create the tunnels that will make it easier for millions of people to whizz east to west across our city.”

Rail Minister Theresa Villiers said, “This is an exciting step forward for the Crossrail project, which will revolutionise rail travel in the capital, create thousands of new jobs and deliver real benefits to the London and UK economies.”

Rob Holden, Crossrail Chief Executive said,  “In less than a year, the first tunnel boring machines will have arrived and begun their journey from Royal Oak to Farringdon. I’m delighted that Londoners will be given the chance to name the machines that will build the major new rail tunnels under London. Even though the start of tunnelling is still about nine months away, work has been ongoing since early 2010 to construct the tunnel portal at Royal Oak from where the first TBM will launch.”

The TBMs will run nearly 24 hours a day, 7 days a week, 365 days a year. There will be scheduled breaks to allow maintenance on the TBMs to take place and tunnelling activity will stop for certain public holidays including Christmas Day.

Each TBM will be operated by a ‘tunnel gang’ comprising of around twenty people – twelve people on the TBM itself and eight people from working from the rear of the machine to above ground.

As the TBMs advance forward, precast concrete segments will be built in rings behind the TBMs. Crossrail today also confirmed that the concrete segments for the western running tunnels between Royal Oak and Farringdon will be manufactured at Old Oak Common and transported to the TBM by rail. Crossrail is currently finalising arrangements with the tunnelling contractors for location of the other concrete segment manufacturing sites.

Such is the scale of Crossrail that up to 14,000 people will be employed at the peak of construction between 2013 and 2015 giving Londoners the chance to build and benefit from Crossrail. Currently 3,000 people are employed on the Crossrail project.

Construction continues to advance on the new Tunnelling and Underground Construction Academy in east London which has recently ‘topped out’ which means that the structure is watertight. The Academy will offer training to at least 3,500 people in underground construction alone over the life of the project. It will provide training on the key skills required to work in tunnel excavation and underground construction and aims to address the shortage of people with the necessary skills to work on Crossrail. The Academy will be fully open by September 2011.