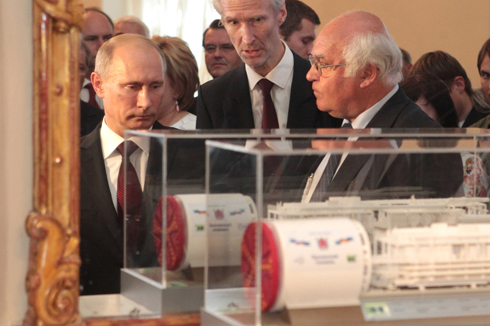 Russian operating company NCC (Nevskaya Concession Company) has placed an order with Herrenknecht for the construction of a world record breaking 19.25m diameter Mixshield TBM. The machine will bore the 1km long Orlovski Tunnel linking the centre of St Petersburg via an underpass of the Neve River, and will be the largest TBM ever built.

At the contract signing Martin Herrenknecht met the Russian Prime Minister, Vladimir Putin, in St. Petersburg. Mr. Putin wanted to discuss firsthand the gigantic road tunnel project – an extremely challenging construction project beneath the River Neva, to be bored under high groundwater pressures. For Herrenknecht, this is the biggest single order in the company’s history and represents a huge technical challenge, helped greatly says Herrenknecht, by an intensive preparatory engineering collaboration between the customer and the contractor.

Including the backup, the Mixshield will be a total of 82m long. The tunnelling shield will weigh around 3,800 tons and deliver 8,400kW drive power to the cutting wheel. The leap in diameter to 19.25m will enable the machine to excavate some 600 cubic meters of soil hourly. The excavation area is more than 50% larger than that for the largest TBM currently in operation in the world.

Tunnelling is set to begin in St. Petersburg in the spring of 2013, with the tunnel due to open for operation in 2016. The tunnel, equipped with two three lane carriageway levels, will relieve the center of St. Petersburg from severe traffic congestion, and allow a continuous traffic flow for the city divided by the river and currently served by bridge crossings.