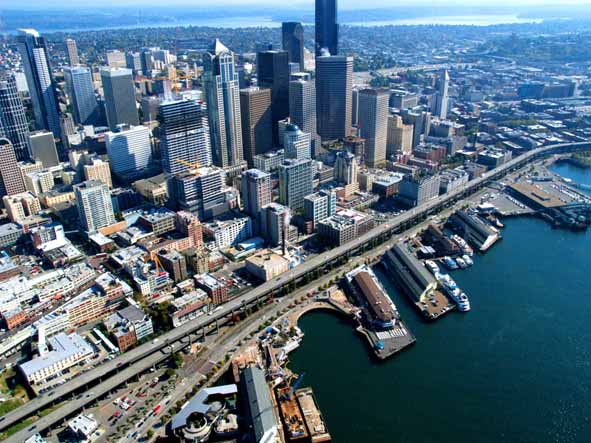 “After a decade of debate, we are taking another step toward creating a new waterfront for Seattle, preserving the capacity businesses need to grow and replacing the viaduct,” said Gov. Chris Gregoire. “Hitachi Zosen’s state-of-the-art proposal exceeded WSDOT’s standards and will help Seattle Tunnel Partners deliver this world-class tunnel project.”

Hitachi Zosen was the best value manufacturer based on overall technical requirements, support capabilities, price and schedule. Located in Osaka, Japan, Hitachi Zosen has successfully built a number of large-diameter tunnels including the Tokyo Metropolitan Expressway (45 feet in diameter) and the Tokyo Bay Highway Tunnel (47 feet in diameter). They are currently supplying the tunnel boring machines for Sound Transit’s Capitol Hill Station to Pine Street segment, in Seattle, and the Bay Tunnel near San Francisco, California.

“WSDOT required Seattle Tunnel Partners to provide and safely operate a machine that could  successfully bore through soil conditions in downtown Seattle, that would protect city infrastructure and buildings, and would provide real-time monitoring information to inspectors,” said Washington Transportation Secretary Paula Hammond. “We are pleased with the selection of Hitachi Zosen and know they will be a strong partner in delivering this complex project.”

Herrenknecht (Germany), Hitachi Zosen (Japan), Kawasaki-SELI (Japan, Italy), and Robbins-Mitsubishi (United States, Japan) all submitted TBM proposals to Seattle Tunnel Partners on May 31. Seattle Tunnel Partners met with the manufacturers numerous times during the evaluation. Some of the factors considered were the teams’ ability to meet technical requirements prescribed by WSDOT and established by Seattle Tunnel Partners specifically for this project; management and supervision on the construction site; cost and schedule; and warranty and bonding.

Seattle Tunnel Partners issued a letter of intent to Hitachi Zosen on July 15, which allows them to begin preliminary design until the project receives federal environmental approval next month. Once approval is issued, WSDOT will direct Seattle Tunnel Partners to proceed with final design and construction, and the design-build team will execute a contract with Hitachi Zosen to design and manufacture the boring machine.