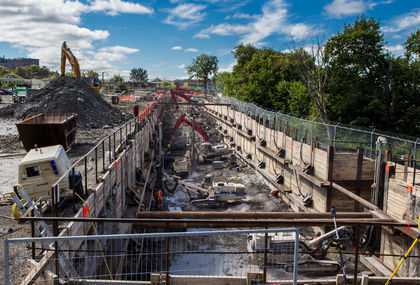 One year into the construction of Ottawa’s downtown LRT tunnel, two of the project’s Sandvik roadheaders have met at the future Lyon station, marking a major milestone for the project.

Late last week, ‘Chewrocka’, which began mining at Queen and Kent streets, broke through into the tunnel carved out by ‘Jawbreaker’ from the west. The machines will now start excavating the cavern for the future Lyon station.

Jawbreaker began at the west portal along Albert Street, just west of Bronson Avenue, in November 2013. Chewrocka began its descent into the central shaft last January, and the third machine, Crocodile Rouge, started mining at the east portal near the University of Ottawa last December (see NATJ’s April/May edition).

All three machines together have carved out more than 1.2km of the tunnel. When complete, the tunnel will be 2.5km long. Excavation of Lyon station is about 45% complete and is scheduled to be finished in early 2015. Parliament station, near O’Connor Street, is about 12% complete.

On the other side of the Rideau Canal, Crocodile Rouge has made its way north to Dalhousie Street and is beginning to turn west toward Rideau Street.

The Rideau Transit Group, the city’s construction contractor, expects workers will start mining Rideau station by the end of 2014. The full tunnel excavation and lining are scheduled to be done in 2016.