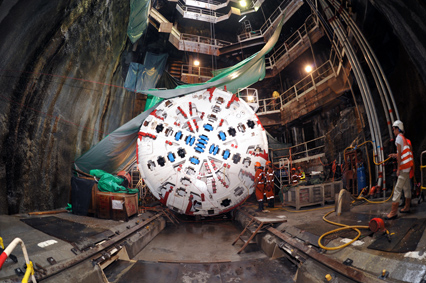 Construction of the West Island Line commenced in July 2009. While most of the tunnels are being built by the “drill and blast” method, because of the mixed ground conditions, the section between Sai Ying Pun and Sheung Wan will be constructed using the TBM.

With a cutter head of 6.5m in diameter and a length of 70m, Xi Shi was delivered in parts and assembled at the shaft in Sai Woo Lane. She will firstly construct the 592m long uptrack tunnel to Sheung Wan, be dismantled, and brought back to Sai Woo Lane, where she will be fitted with a new cutter head and shield to build the 217m downtrack tunnel.

The MTR West Island Line is an extension of the existing MTR Island Line from Sheung Wan to Kennedy Town. The extension is scheduled to open in 2014 for passenger service. A full report on C703 of the WIL, which includes the section being built by Xi Shi, will appear in the October/November issue of TJ, coming soon.