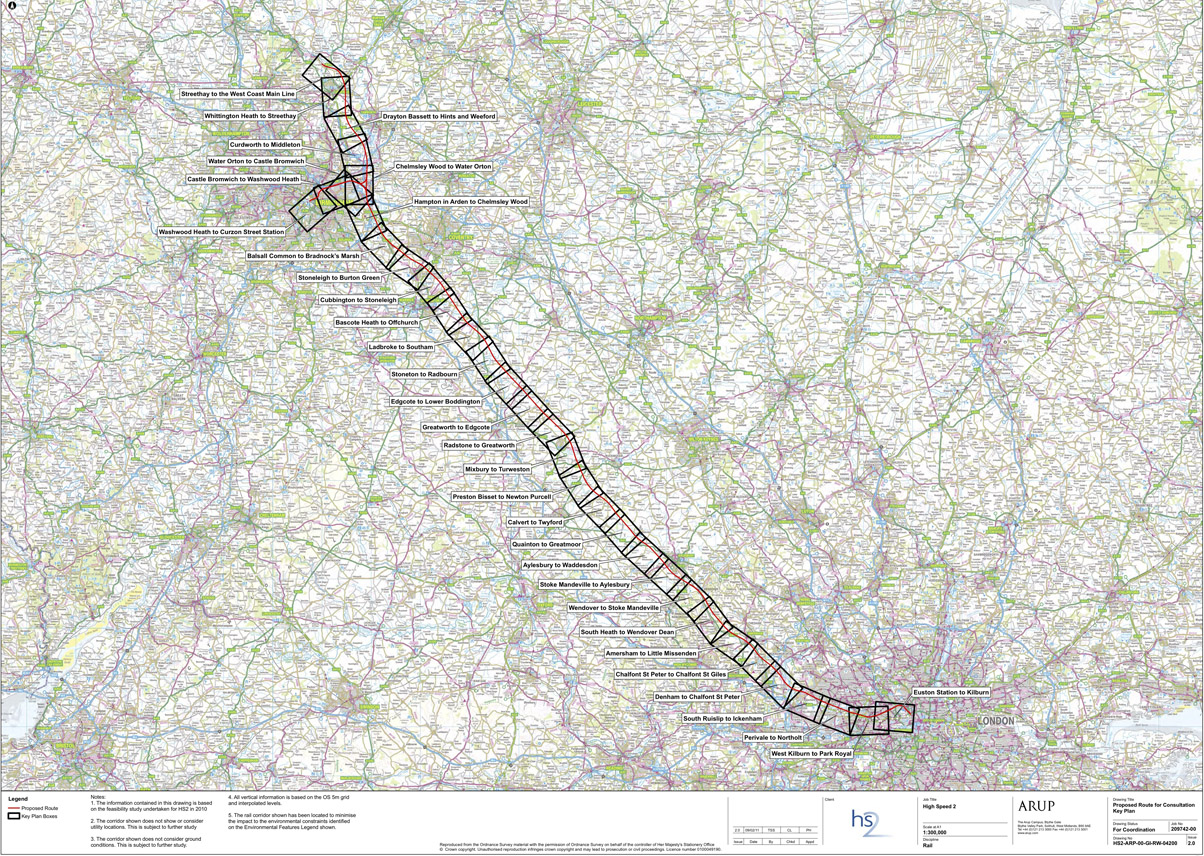 The Government is proposing a ‘Y’ shaped network linking London, the West Midlands, Manchester and Leeds, with stations in South Yorkshire and the East Midlands, and links to existing lines to enable through-running services to other cities including Liverpool, Newcastle, Glasgow and Edinburgh. The scheme would deliver around US$71bn of benefits and would cut journey times between London and other major cities by as much as an hour.

HS2’s would leave the capitol via the twin tube 8.25km long, 7.25m i.d. Euston to Old Oak London Tunnels, with 4m i.d. connecting cross passages every 250m. The tunnels would run mainly through London Clay and will be bored by TBMs with a typical rate of around 10m/day.

The Chiltern Tunnels are 9.6km of twin 8.5m i.d. tunnel running through mostly chalk, again to be bored using TBMs. The larger i.d is to accommodate the aerodynamic effects from the higher line speeds (up to 320kph) in this area. They would also have 4m i.d. cross passages every 250m for emergency evacuation.

The short tunnel from Little Missenden to South Heath, at 1.05km would be single bore with an i.d. of 9.8m, constructed using SCL, whilst the final tunnel, the Long Itchington Wood Tunnel, is 1.4km and would be a single bore with an i.d. of 12.8m. Ground conditions in the vicinity are known to be mixed, so until a full geotechnical investigation has been carried out, HS2 will not know whether this tunnel will be constructed using SCL or a TBM.

Philip Hammond said, “We must invest in Britain’s future. High speed rail offers us a once-in-a-generation opportunity to transform the way we travel in the 21st century and would help us build a modern economy fit for the future.

“Countries across Europe and Asia are already pressing ahead with ambitious plans for high speed rail, while some of our key rail arteries are getting ever closer to capacity. We cannot afford to be left behind – investing in high speed rail now is vital to the prosperity of future generations.”

A direct link to Britain’s existing high speed line, High Speed 1 – which runs from London St Pancras to the Channel Tunnel – is also proposed as part of the initial phase of the scheme, to allow travel from cities linked to the high speed network to the continent. Construction of a direct link to Heathrow airport – which, under the proposals, would be built at the same time as lines from Birmingham to Leeds and Manchester – would enable direct high speed services to run to and from the airport, providing an attractive alternative to many short-haul air journeys and bringing central Birmingham within an hour of Heathrow, and Manchester and Leeds within around 70 and 75 minutes respectively.

In December 2010, the Government announced its proposed route for the first phase of a high speed line between London and the West Midlands. The consultation which begins today is both on that proposed route and the Government’s strategy for a wider network. The consultation will run until 29 July and events will take place in towns and cities along the 140-mile proposed route between London and the West Midlands, as well as in major cities across the country.

Subject to the outcome of this consultation, the Government intends to secure powers to deliver each phase of its proposed high speed network by means of the hybrid bill process. Construction of any new network would be expected to begin early in the next parliament, with the line to the West Midlands completed by 2026 and the legs to Manchester and Leeds finished in 2032-2033.