Today [2 December] HS2 CEO Mark Thurston pushed the button to start HS2’s TBM on its 1.6km journey under Long Itchington Wood in Warwickshire, marking the launch of the first TBM on the Midlands section of HS2.

Around 170 engineers have been working on the 2,000 tonne, 125m long Herrenknecht TBM during its construction and assembly and will operate the machine for around five months as it excavates the first bore of the 1.6km tunnel. 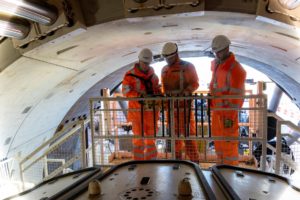 HS2 Minister Andrew Stephenson said: “This is yet another vital landmark in our journey towards a better connected Britain and with the launching of Dorothy today in Warwickshire, shows real progress in helping transform journeys across our country.

“It also underlines how our £96bn (US$128bn) Integrated Rail Plan – the largest ever investment in our rail network – is instrumental in creating jobs and economic opportunities, and ensuring more people reap the benefits of better rail journeys.”

This will be the first HS2 tunnel to be completed on the project, with the machine set to break through its first bore at the south portal in Spring 2022. It will then be disassembled and taken back to the north portal to dig the second bore, which is due to be completed in early 2023.

HS2 CEO Mark Thurston said: “Today is another major milestone for HS2. You can see the real progress the project is making as we launch this TBM on one of HS2’s largest sites in the Midlands, contributing to massive job creation in the region.

The machine will remove a total of 250,000 cubic metres of mudstone and soil which will be transported to the on-site slurry treatment plant where the material is separated out before being reused on embankments and landscaping along the route.

“As Dorothy, our cutting-edge Tunnel Boring Machine, sets off on her one-mile journey, our work across the northern section of HS2 continues to progress at pace. Over the next few months, we’ll be building on our efforts to recruit the 7,000 people required across the Midlands to help us shape the UK’s future infrastructure landscape; those who will see their work enjoyed for many years.”

Working in partnership with youth charity the Prince’s Trust, Balfour Beatty VINCI has pledged to provide 30 Kickstart placements this year as part of its ongoing commitment to support young people from the local area into work. Kickstart is a Government funded initiative aimed at creating job placements for 16- to 24-year-olds who are on Universal Credit and at risk of long-term unemployment. It forms part of the Government’s Plan for Jobs campaign and is designed to support those who have been adversely affected by the pandemic.

Three Kickstart placements have now secured permanent roles with BBV, including Samuel from Tamworth, who had originally wanted to become a mechanical engineer but had been unemployed during lockdown.

Samuel, who is now doing a Site Engineering Apprenticeship with BBV, said:

“It’s exciting knowing that I am working on a project as big as this – it’s a major project for my country that also aims to benefit local businesses. I hope to progress my career inside of Balfour Beatty VINCI and continue working on HS2 as a whole. If civil engineering is a career goal for anyone, then HS2 is one of the best jobs you can have on your CV. It’s a major project and from my experience the day-to-day scale of the job is very exciting. Every week looks different to the last.”

The final section at the south end of the tunnel will become a ‘green tunnel’ – also known as a cut and cover tunnel – where a soil ‘roof’ is built around the tunnel entrance to integrate the portal into the natural landscape.

In total there will be ten HS2 tunnel boring machines (TBMs) on Phase One, working to create 64 miles of tunnel between London and the West Midlands for Britain’s high speed rail project.