Home > First HS2 TBMs prepare to ship to the UK

First HS2 TBMs prepare to ship to the UK 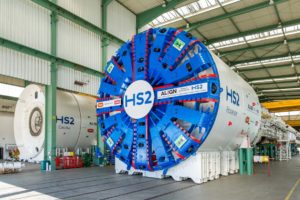 The machines – built by Herrenknecht – will be shipped in pieces to the UK and arrive at Align’s main site to the west of London just inside the M25 later this year.

The first TBM ‘Florence’ is set to be launched early next year to begin digging the 16km long Chiltern tunnel. The second, ‘Cecilia’ will launch around a month afterwards on the twin bore.

Both 170m long machines are specifically designed for the mix of chalk and flint they will encounter under the Chilterns. They are expected to take around 3 years to excavate the tunnels which will be lined with concrete as they go. The TBM’s spoil will be pumped back to the main site where it will be treated before being used for landscaping on-site, removing the need for additional HGVs on local roads.

Daniel Altier, Align Project Director said: ”Florence and Cecilia incorporate the latest technology which will be essential to ensure an efficient and safe excavation of the twin-bore tunnel. This will be the first time that some of the innovations we are introducing will have been used on any TBM worldwide.