New tunnelling tech company hyperTunnel has been making mainstream headlines today with the announcement that it has constructed the first-ever robot-built tunnel. Its hyperBots created a 6m-long tunnel, 2m high and 2m long – which hyperTunnel has dubbed Peak XV – at its R&D facility in the North Hampshire Downs, as part of a research project for Network Rail. 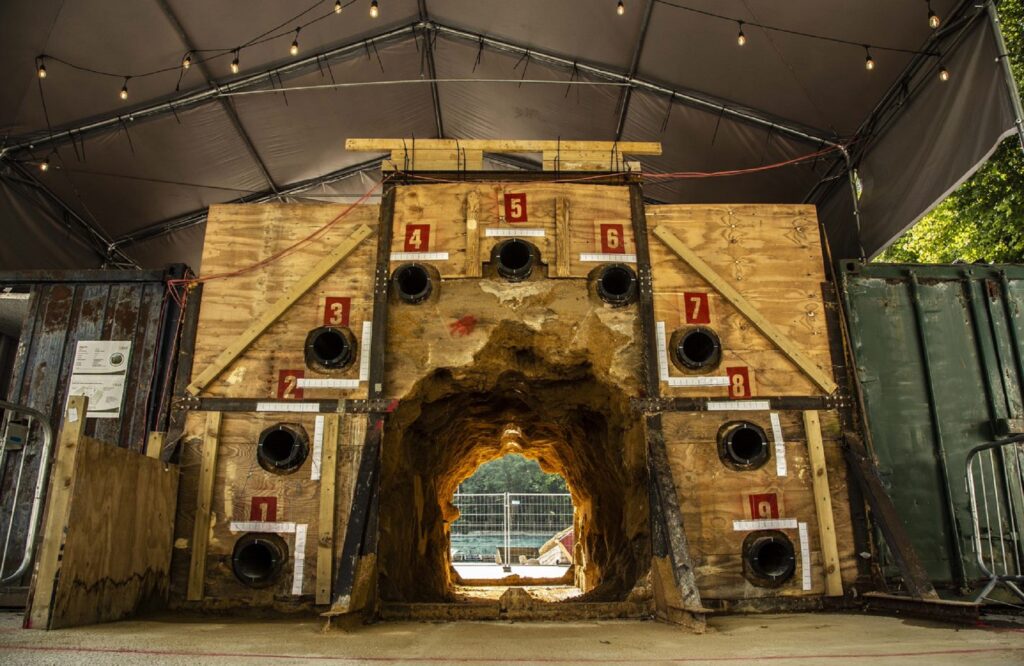 To construct the passenger-sized tunnel, hyperTunnel inserted HDPE pipes into the ‘ground’ and then sent in its hyperBOT robots which then injected chemicals into the ground to stabilise it through holes in the pipes. With a lining in place, the idea is that the tunnel can then be safely executed.

Network Rail is interested because the technique could be used for repairs or to enlarge existing tunnels. David Castlo, network technical head (mining and tunnels) at Network Rail, said in a release: “Our large portfolio of Victorian tunnels requires increasing levels of work to meet the needs of the railway network. However, we want to reduce the level of disruption to our passengers so we are constantly searching for new approaches to enlarging or repairing tunnels that reduce the length of time a tunnel will be closed to trains. Peak XV moves us a step closer to that goal and, crucially, with a method that reduces workforce safety risk.”

Speaking at the British Tunnelling Society (BTS) conference in London last week, co-CEO Jeremy Hammond said that the company was already starting this year to work with Network Rail on water ingress issues. There are other applications on the table too. hyperTunnel thinks its technology could help make the construction of cross passages between main TBM tunnels safer and faster and is starting work on projects linked to this application. The ultimate goal of hyperTunnel co-founders and co-CEOs Steve Jordan and Hammond is to make it viable to build multiple tunnels to create renewable energy from wave power.

Hammond likens hyperTunnel’s technique of using swarms of drones to that of Victorian tunnel builders who deployed hundreds of workers, approaching tunnels from a variety of shafts and fronts. “The speed of construction will not be defined by the length or diameter of the tunnel, only by the number of bots,” he told the BTS conference.

With €1.88m of funding from the European Innovation Council Accelerator scheme and a financial investment from VINCI, hyperTunnel has been busy recruiting technical heavyweights from a number of fields. Among them is Sid Shaikh, the company’s head of robotics, who came from Ocado where he was head of engineering and where Hammond says he took order processing from two hours to two minutes.

Also joining the team is Dr Sven Asmus, former CTO at Master Builders Solutions, as director of chemistry and materials development. Chemistry – the additives needed to safely and effectively shore up a variety of ground – are at the heart of this process. As yet, hyperTunnel has had little to say on this subject.

At the BTS conference, Hammond offered the industry the opportunity to become ‘founder distributors’ of its technology. The first 20 companies to sign up as founder distributors would go on to receive 5% of the balance of future annual licence fees, he said, as well as to influence the direction of the company. “We are a tech company, not a contractor or consultant,” he said.