Plans to replace the aging and congested George Massey Tunnel, in British Columbia, Canada, took another step forward on November 1st. Metro Vancouver’s board of directors voted to endorse an eight-lane immersed-tube tunnel as its replacement, following recommendations by a task force last month.

The proposal calls for one kilometre of tunnelling and the removal of about 1.5 million cubic metres of salt-contaminated soil. 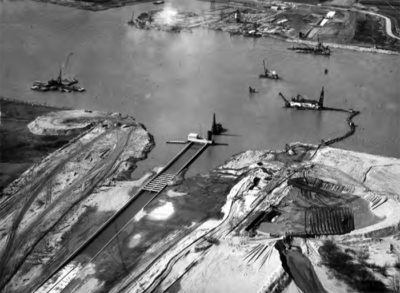 Originally, the four-lane, 629m (2,065ft) long George Massey Tunnel – a 60-year-old highway traffic tunnel located approximately 20km (12.5-miles) south of Vancouver – was to be replaced by a CA$3.5bn, 10-lane bridge, but this plan was scrapped by the new NDP provincial government in 2017.

In June 2019, a preliminary List of Options was developed along with an Evaluation Framework that reflected the principles, goals and objectives required in assessing options and selecting a preferred option. An engineering services contract was awarded to COWI North America to provide support.

In July, the Mayors’ Task Force endorsed a short list of six options, focused on addressing congestion and providing attractive options for transit and active transportation. A deep bored tunnel was instantly rejected on the grounds of it costing some four times that of most of the other options.

Metro Vancouver will now direct the NDP government to start work on an eight-lane immersed-tube tunnel. The eight lanes include six lanes for regular traffic – three in each direction – and two more dedicated to transit, along with a multi-use path. Cost estimates for the new plan vary greatly, on the low end at CA$3.5 billion (the same price as the bridge that was already in the works) to $5 billion.