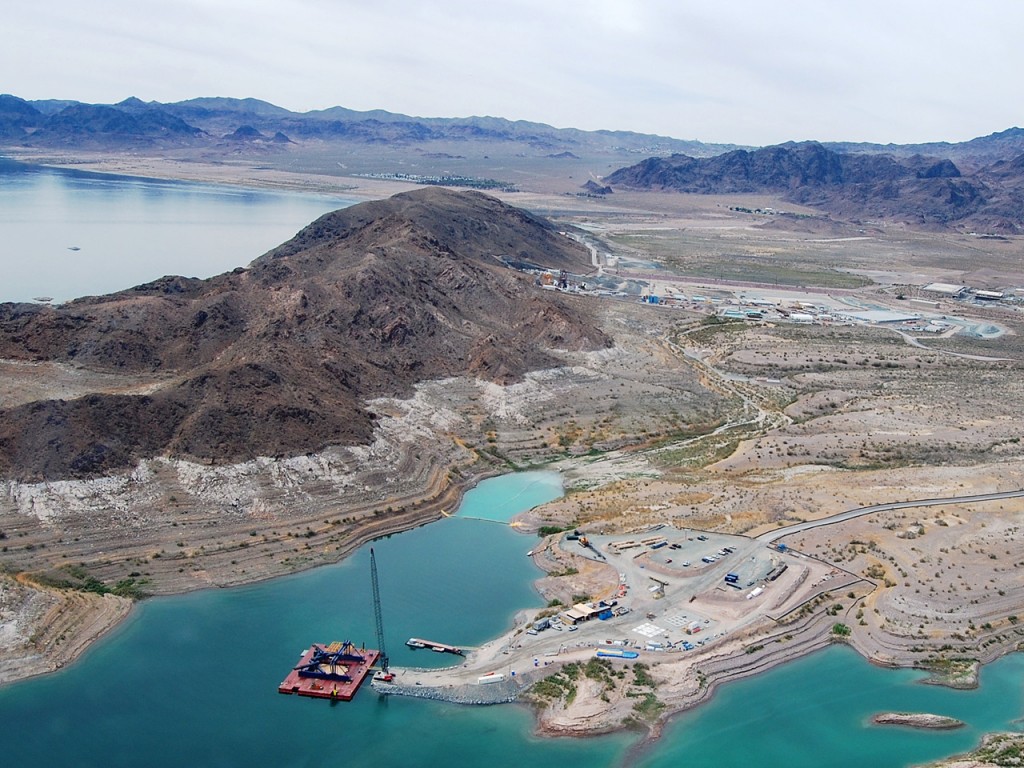 Concluding a 3-mile journey that began in 2011, the 23.29ft (7.1m) diameter Herrenknecht Multi-mode TBM excavating Southern Nevada’s $817 million third water intake beneath Lake Mead reached its destination on December 10, when it holed through into the concrete intake riser structure that was secured to the bottom of the lake in 2012.

“This is one of most complex and challenging tunneling operations ever attempted; therefore, today is a significant milestone for this historic project,” said Southern Nevada Water Authority (SNWA) General Manager John Entsminger. “Coupled with a future pumping station capable of withdrawing water, even at extremely low lake levels, the new intake system helps assure a dependable supply of water for future generations of Southern Nevadans.”

The project included the construction of the 20ft diameter concrete-lined tunnel extending three miles through complex and variable geologic features under the lake; construction of a 100ft tall intake riser structure installed on the bottom of Lake Mead; a 600ft deep access shaft; and additional underground connections to link the intake to the SNWA’s existing water intake system.

Vegas Tunnel Constructors – a joint-venture of Impregilo and SA Healy – was contracted to perform the design-build contract behalf of the SNWA in March 2008. Lead designer for the JV is Arup, supported by Brierley Associates.

Work on the new intake began with the excavation of a 600ft vertical access shaft on a peninsula at the west side of the lake. Since then, the project has been hit by a series of setbacks – including a series of groundwater inundations that flooded the TBM assembly chamber and shaft – that added more than two years and almost $40 million to the cost.

The worst moment came on June 11, 2012, when an accident during tunnel segment installation killed well-known miner Thomas Turner, 44. The father of two – who began his tunneling career in 1995, working on San Diego’s South Bay Ocean Outfall, then later in San Bernardino on the Inland Feeder Project – is remembered on the job site with stickers on hardhats and buildings.

The world record-setting project, which encountered the highest water pressures of any TBM tunneling operation to date, still has several remaining activities before the project is complete. These include sealing the connection between the intake tunnel and riser structure; disassembling the 600ft long TBM and removing it from the tunnel; and installing smaller utility pipelines within the tunnel.

“Constructing a project of this magnitude certainly brings unique challenges,” said, Erika Moonin, SNWA Project Manager. “This is a significant accomplishment for the entire project team. The field crews deserve special recognition for their hard work and dedication; they work in difficult conditions and consistently bring their best each day.”

Approximately 2,400 precast concrete rings – each weighing more than 32 tons – were installed to line and reinforce the excavated tunnel. The rings were lowered underground in five segments + key, which were then assembled behind the TBM as it advanced.

Lake Mead Intake No. 3 substantially increases the reliability and flexibility of Southern Nevada’s water treatment and delivery system. Combined with the low lake level pumping station that is currently under consideration, the new intake enhances the SNWA’s existing intake system, enabling Southern Nevada to continue accessing its water resources in Lake Mead, even if lake elevations drop too low for Hoover Dam to release water to downstream users.

Construction of Lake Mead Intake No. 3 was initiated in 2008. The project is scheduled for final completion in 2015.