Yan, who beat France’s Eric Leca to the presidency, is the first woman to lead the ITA since it was formed in 1974. She has over 30 years’ experience as a consulting engineer and researcher on major tunnelling projects and has won many awards, including China’s Top Ten Brand Women in 2018. 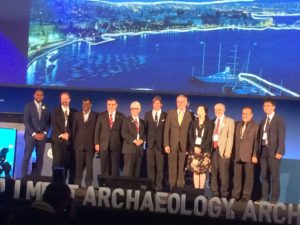 The vote took place at the Association’s general assembly on 8 May, which rang alongside the World Tunnelling Congress (WTC) in Naples from 3 to 9 May. The theme of WTC 2019 was ‘Tunnels and underground cities: engineering and innovation meet archaeology, architecture and art’.

Among the 11 topics covered in 700 papers published by the Congress, there were some universal themes which were addressed on the opening day and subsequently in a number of papers. Perhaps the two biggest challenges still facing the tunnelling industry are how to get up-to-speed with digital construction, so-called Construction 4.0, and how to attract more young people.

Speaking at at the opening ceremony of WTC 2019, Pietro Salini, chief executive of Salini Impregilo, urged the industry to invest in minds as well as in technology. Martin Herrenknecht, chairman of tunnel boring machine manufacturer Herrenknecht, started his Muir Wood lecture by saying that the industry needed to communicate the rewards of a lifetime career in tunnelling more effectively to young people.

There are some encouraging signs when it comes to younger tunnelling professionals. More and more member nations of the ITA are establishing young member groups. According to the organisers, 400 of the 2,000 attendees this year were students or young members (under 35s).

The ITA itself continues to expand with Albania, Kenya and Lebanon becoming new member nations this year. The annual assembly also decided on the location for the WTC 2022; it was a battle of the beaches, with Cancun pitted against India’s Goa. Cancun was selected, following on from Kuala Lumpur next year and Copenhagen in 2021.

Yan’s presidency will run from now until 2022. Though the executive committee of the ITA remains very much male dominated, Yan’s election is an important first step for an industry that wants to attract individuals and skills from a wider pool of talent.