The winners of the 5th annual ITA Tunnelling Awards have been announced in Miami. The event took place on November 18, in conjunction with the Cutting Edge Conference organised by the UCA of SME and NATJ. The winners are: 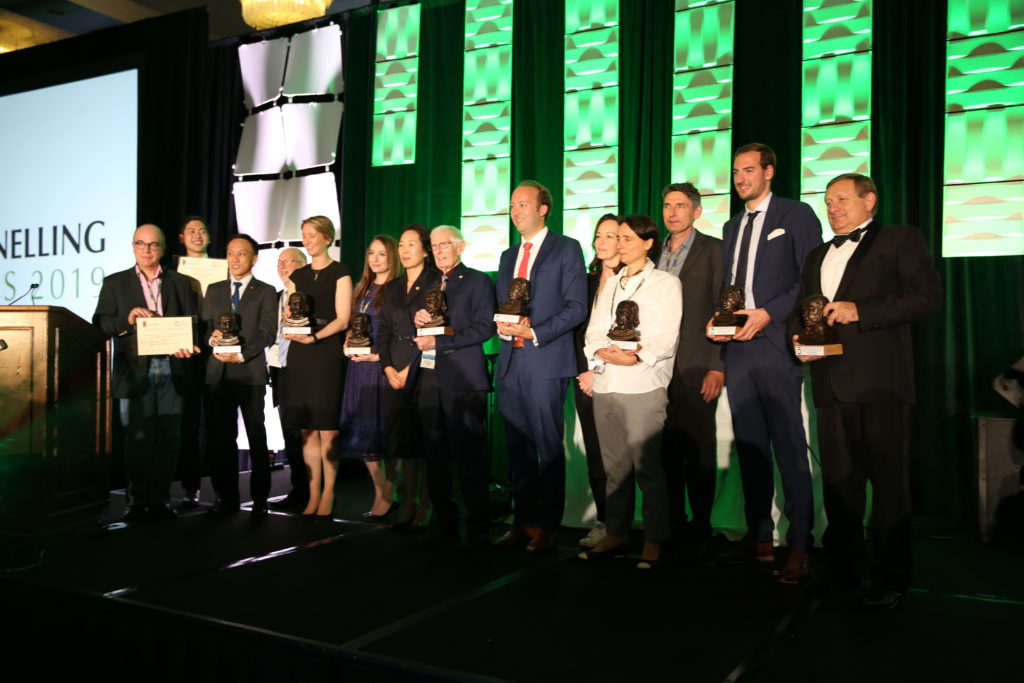 The winner for the Major Project of the Year in the over-€500M category is the Tuen Mun Chek Lap Kok Link, which will provide an alternative access route to the Hong Kong International Airport located on Chek Lap Kok Island, which had previously only been accessible via the Tsing Ma Bridge.

The works comprise a 4.5-km twin-tube sub-sea tunnel with 57 cross passages as well as a 500m cut and cover section. Construction required two slurry TBMs with an excavation diameter of 14m. The teams had to use innovative solutions to cope with harsh ground conditions and hydrostatic pressure of 5bars at tunnel face (55m below sea level). The first 630m of excavation were also operated by a 17.63m diameter TBM (the world’s largest TBM), which was then reconfigured as a 14m diameter machine. 41 sub-sea cross passages were also constructed by mini TBM. The first breakthrough was completed on 27 February 2019 and the overall cost of works is estimated at €2.36bn.

The project will extend from the Los Angeles Metro Gold Line Little Tokyo/Arts District Station to the 7th Street/Metro Center Station through downtown Los Angeles. 3 new metro stations will be constructed: Central, Broadway and Hope. Hope is estimated to be the deepest station in Los Angeles, 120 ft below ground. The project includes a connection to the existing 7th St. and Flower Station. This project will allow people to ride from Santa Monica to East Los Angeles and Azusa to Long Beach without having to change trains, but also connecting the Exposition and Blue lines directly to Union Station. LA Metro estimates that the Regional Connector will increase ridership across the entire transportation system by 17,000 people per day and save commuters an average of 20 to 30 minutes by reducing the need to transfer to different lines.

Major challenges were encountered during the works and consequently, a few innovations were implemented. Unforeseen obstructions during the TBM drive and SEM construction were unique and extremely challenging. Armed by the support of all teams, the project overcame those difficult challenges by turning a one-month delay into a two-month schedule acceleration.

The overall cost of the project is estimated at $1.2 billion.

Project of the Year incl. Renovation (up to €50M): Modernization of the Vladivostok tunnel on the Far Eastern Railway, Russia

For the first time in Russia, Mosmetrostroy applied technical solutions that made it possible to obtain a fundamentally new multi-layer lining of an 82 year old tunnel. The task was successfully implemented with a significant reduction in time (by 1.5 years) and the cost (2 times) relative to the initial project solution, where reconstruction works on the tunnel would have required a complete tunnel closure for trains for the period of work and the construction of a bypass railway section through the city centre.

The positive results achieved make it possible to further disseminate this technology when modernizing numerous other tunnels located on the huge railway network in Russia and abroad, many of which are of a considerable age.

The special feature of this project lies in building three underground station extensions, which required the removal of the tunnel lining, while keeping the subway in operation. One of the operation complexities was the necessity to limit any inconvenience for the passengers, while guaranteeing the accessibility and security requirements of an automatic operating metro.

This needed to be done along with minimizing, as much as possible, the disturbance caused by the works on the very urban environment. A steel rib support lined with steel plates was placed around the tunnel during the summer 2017 and removed in summer 2018. This tunnel shell isolated the construction site from the subway in operation. This made the construction of the diaphragm walls, the excavation on both sides of the tunnel and cutting of the lining in the extension are a possible. At no time were the 220,000 passengers of the A Line aware of travelling in the heart of an underground construction site. A success that deserves to be recognized.

The aim of this project is the development, testing and deployment of AI algorithms for an autonomous system to operate multimode TBM’s on a tunnelling megaproject.

The Autonomous TBM system is a “plug and play” solution imagined as a custom software installed on an industrial PC module. Teams developed this system as an extent of a previous technological innovation, the Variable Density (VD) TBMs which are capable of multimode operations, including full slurry and Earth Pressure Balance processes. The sophisticated operation of the multi-mode VD TBMs necessitates re-training even for experienced operators as it involves new operating techniques, providing the initial motivation to develop the « Autonomous TBM » system.

Global tunnelling boom and the bourgeoning of tunnelling projects worldwide lead to an ever-increasing demand for TBM operators. The safe delivery of tunnelling projects relies heavily on TBM operators’ competency. However, it is difficult to gauge and validate an operator’s skills through formal hiring processes. There is also a huge variability in operator competency levels and additional training requires significant resources and time.

Indeed, a TBM has over 400 sensors sampling thousands of data points every minute. A computer is highly suited to process these data points and respond instantaneously with appropriate decisions. In contrast, human operators are limited by their ability to only view each data point individually and sequentially, resulting in slower response times.

The « Autonomous TBM » system has been developed in Malaysia, for the Klang Valley MRT Line 2 project, currently the largest mega-infrastructure project being undertaken by the Malaysian Government. It has already successfully completed 3km of urban tunnelling in complex geologies undercrossing sensitive infrastructure including live rail lines and a 14-lane highway.

The Swiss Center for Applied Underground Technologies (SCAUT) has developed and commissioned the first ‘Underground Green Farming’ prototype for a sustainable food production using aquaponics. Aquaponic systems combine aquaculture with hydroponics in a symbiotic environment. The project is divided in three parts : fish, vegetables and biofilters. The system works in a cycle: water from the fish ponds is fed to a hydroponic system and then recirculated back to the aquaculture system. The use of LED lighting allows for stimulating plant growth through specific targeting of certain light frequencies. The link with Carbon Capture and Storage allows for use of CO2 turning it from a waste to a feedstock.

A further phase would be to investigate the possibility of using CO2 from carbon capture and storage schemes for plant growth and thereby conversion of CO2 to O2. With SCAUT’s underground green farming concept, several harvests per year will be possible. Underground green farming offers the opportunity to produce food locally in urban areas – exactly where the demand is.
Consequently, there is no need to ship food all over the world. Underground Spaces offer constant climate conditions -extensive cooling during summer or heating during winter is therefore not required.

Silica dust is one of the major health issues for the Australian tunnelling industry. In Australia, tunnel construction workers have an increased risk of developing occupational disease when compared to the general construction industry.

The Australian Tunnelling Society is a strong proponent of the importance of health and safety in the tunnelling sector. The stakeholders of ATS took a proactive approach to this health issue through leveraging the strong experience of their membership and have produced a much needed body of knowledge to support an ever-growing industry.

This entry highlights the ambitions of the whole Australian industry for the prevention of health issues. Over the period of 12-months, the ATS facilitated an Air Quality Working Group (AQWG) which focused on sharing information to address the challenges associated with controlling silica dust and producing a much-needed body of reference material that previously did not exist in the tunnel construction industry’s body of knowledge.

Several conclusions were produced by this initiative: standardised awareness material that could be effectively delivered during toolbox talks and tunnel inductions; addressing higher-level business processes associated with the tunnel construction life-cycle so that the risk of silica dust exposure could be effectively considered by client organisations during project planning and design; numerous case studies on engineering controls including those on ventilation scrubber systems, portal misting systems and Roadheader cabin air filtration, in addition to general information on ventilation.

Since its publication 4 months ago, the published body of knowledge has been accessed over 1,630

times, demonstrating the level of interest and importance of this work.

Amanda received a Bachelor of Science in Engineering in Civil Engineering with a Minor in Spanish Literature, as well as a Master of Science in Engineering in Construction Engineering. Throughout her Undergraduate studies, she held leadership positions in her university’s Chi Epsilon, ASCE, and NASTT student chapters performing STEM outreach activities, particularly focused on Underground Infrastructure, with surrounding elementary schools and youth programs. As a winner of the NASTT Michael E. Argent Scholarship, bringing more talent, diversity, and focus to the trenchless industry is of the utmost importance to her. She began her construction career with heavy civil work with the Southwest Branch of Granite Construction, on the Tucson International Airport project in Arizona (US) where she gained firsthand knowledge of the success possible with the proper implementation of alternative delivery methods. She then went on to work as a heading engineer on the Northgate Link Extension with Michels-Jaydee-Coluccio. Following this position, she worked as a Lead Field Engineer for the joint-venture of Michels-Jaydee on the Blacklick Creek Sanitary Interceptor Sewer (BCSIS) tunnel project. She was involved in the TBM Design and Hardware selection, led a team of engineers managing the construction of eleven shafts, served as lead project scheduler, and managed the BCSIS Environmental program. After two years, she became Lead Project Engineer, where she oversaw major structural design modifications that significantly reduced construction costs and saved the project over 180 calendar days, as well as successfully negotiated project change orders with the client, preventing any outstanding claims. Amanda currently works as a Lead Project Engineer for the large diameter tunnelling division of the Michels Corporation.

With over 45 years of experience in the tunneling industry in the US and around the world, Dr. Parker has made significant contributions to signature tunnelling projects through leadership and expertise. He has been involved with many iconic projects. He is a University of Illinois Urbana-Champaign alumni where he received his Ph.D. in Civil Engineering with Minor in Geology.

He also holds a M.S. in Civil Engineering from Harvard University and B.S. in Civil Engineering from Auburn Polytech. He has held adjunct or visiting teaching positions at University of Illinois and Columbia University and is the author or co-author of over 60 publications; often on planning, risk management, and geotechnical investigations. Specific examples include the Alaskan Way Viaduct replacement project in Seattle Washington, the largest bored tunnel in the world at the time, the metro system in Los Angeles, and the inception of the metro system in Washington DC. His knowledge has been captured and available to students and the practicing community through chapters in the most recognized textbooks in the industry.

The winners of the 5th annual ITA Tunnelling Awards have been announced in Miami. The event took place on November 18, in...