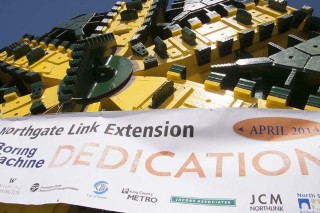 ‘Brenda’ will be the first of two TBMs to begin the 3.6-mile (5.8km) journey from NE 92nd Street, along I-5 south, to the University of Washington Station, when crews start tunneling operations in early June. The machine will pause at the Roosevelt and U District stations, before reaching the University of Washington Station next to the Montlake Cut – a two-year journey through the region’s glacial soils. A second machine will follow on the northbound tube later this year.

In 2012, the now-refurbished Hitachi Zosen machine successfully completed two one-mile tunnels for the U230 contract of the University Link light rail project, between downtown Seattle and Capitol Hill (see feature article in NATJ Oct/Nov 2012 digital edition). That project is currently scheduled to open in the first quarter of 2016, six to nine months early, and more than $100 million under budget.

The 4.3-mile (6.9km) long $2.1 billion Northgate Link Extension will run mostly underground through one of the most congested travel corridors in the region and includes underground stations serving the U District and Roosevelt and an elevated station at Northgate. 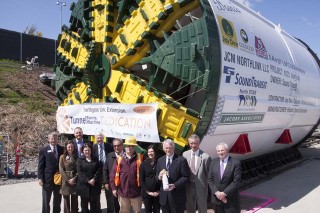 A joint venture of Jay Dee Contractors, Frank Coluccio Construction Company, and Michels Corporation, (JCM Northlink) won the contract for the Northgate Link tunnel and station work with a bid of $440,321,000, coming in some 25% below the engineer’s estimate.

Elsewhere on the project, jet grouting operations at the south end of the Roosevelt Station site are now complete and works have moved to the north end of the station in readiness for when the TBMs arrive from the Maple Leaf Portal launch site. Last week (end of April), crews also began shaft construction for the U-District Station box.

Train service on the Northgate Link extension is scheduled for September 2021.