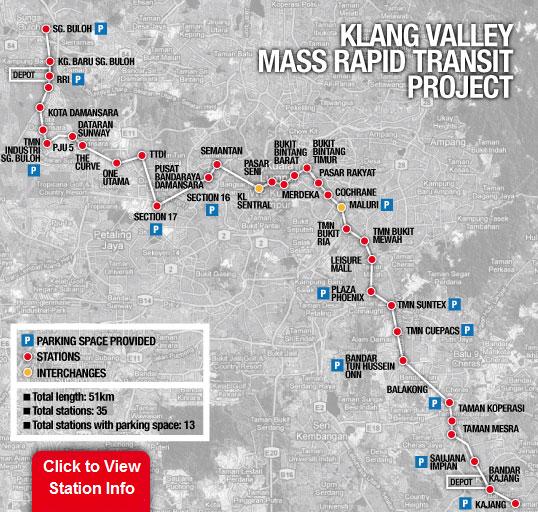 Contractors bidding for the multi-billion ringgit My Rapid Transit (MRT) have been warned to stay clean, or risk actions from the law including de-registration of their companies and having their tenders terminated.
Contractors attending  the MRT pre-tender briefing at Syarikat Prasarana Negara Berhad (Prasarana) in Kuala Lumpur yesterday were told that the company would be firm against any efforts of bribery; and would be reporting to the Malaysian Anti-Corruption Commission (MACC) in accordance to an unprecedented Integrity Pact agreement that it would enter with the contractors.
It was the first time in the history of Prasarana that a tender briefing for contractors was joined by the MACC; which reflected the company’s firm commitment to keep the MRT project clean of bribery and corruption.
Addressing the contractors at the briefing, MACC Deputy Chief Commissioner (Prevention), Datuk Hajah Sutinah Sutan said Prasarana had already signed the IP with MRT Project Delivery Partner, MMC Gamuda KVMRT and would be signing similar pacts with the contractors.
“Both Prasarana and the contractors must adhere to conditions set upon by the Integrity Pact. Be warned that Prasarana is firmly committed to the IP and will report to us at MACC if there  are any attempts of bribery by any of the contractors,” she said, adding that the contractors should also report to the commission if there were cases of officials at Prasarana soliciting for bribes from the contractors.
Saying that the construction industry has been one of the biggest culprits in the subject of bribery and corruption, Sutinah said contractors would be making a criminal offence under the MACC Act to accept and to solicit for bribes in return for a favour; usage of false documents and misuse their positions for self-interest.
“It’s also an offence for contractors to pay out their rivaling contractors to withdraw their bids to win contracts,” she said, adding that offenders could fail jail sentence up to 10 years; or being fined of not less than five times value of their bribe; or fined RM10,000 whichever is higher; or both.
Twenty eight individual and JV companies qualified for 18 MRT elevated civil works, station and depot work packages where tenders would be called in stages from next month until December 2012. Of the 18, eight packages are for the elevated civil works; another eight for elevated station works and two packages for depo.
Prasarana’s Head of MRT Procurement,  Encik Abdul Malik Azman said that contractors bidding for tenders would need to sign the IP documents upon submission of tender applications to show their commitment to fight corruption; and that they would be signing the pacts again with Prasarana after they won their respective contracts.
The first of the 18 work packages to be called would be for Viaduct Package 5 for a stretch of 5.2kms between Taman Bukit Ria and Phoenix Plaza in Cheras; and for Viaduct Package 6 for a stretch of 5.4kms from Plaza Pheonix to Bandar Tun Hussein Onn. Tenders for the two works packages would be called next month, Malik said, adding that construction
works should begin in January or February next year.
For the underground packages, he said that the Government was still making its evaluation of companies that had submitted their Pre-Qualifications; and that a decision would be made on the qualified companies next month.
Hailed as the country’s biggest infrastructure project as part of the Greater Klang Valley Master Plan, the MRT would provide the backbone service to the existing public transportation system and would be integrated with the existing LRT, KL Monorail and KTM services. To cut through the city centre from Sungai Buloh to Kajang, the new MRT will run for approximately 51kms including 9.5kms through tunnels and will be serviced by 27 elevated stations and seven stations underground; and depots at Sungai Buloh and Kajang.