Los Angeles Metro has announced that its first TBM, ‘Elsie’ has  broken through into the Wilshire/La Cienega subway station in Beverly Hills on Section 1 of the Metro D Line (Purple) Extension project. It is the first of two TBMs that will reach this last station.

Tunnelling for the first 6.4km long (four-mile) section of the subway project is now two-thirds complete. More than 90 percent of the tunnels have been mined safely and Metro anticipates completing tunnel  boring this summer. Excavation for all three subway station boxes beneath Wilshire Boulevard has been completed.

Elsie, the 1,000-ton, 400-feet long Herrenknecht TBM, started west at the Wilshire/Fairfax station on May 29, 2020, and broke through to the Wilshire/La Cienega station site about 1.6km (one mile) away on February 25. Metro’s first TBM “Elsie” arrived at Wilshire/Fairfax on April 4, 2020.

Reaching this milestone is a significant win for Metro. Section 1 of project tunnelling has presented challenges that have been successfully overcome by the project. En route to Wilshire/La Cienega, the agency’s TBMs have bored through a unique combination of soils and geologic conditions, including tar sands and methane gas.

Metro’s TBMs were first lowered into the ground at Metro’s Wilshire/La Brea station site in the Miracle Mile area of Wilshire in October 2018. While advancing, the TBM tunnelled about 20m (60 feet) per day. They worked five days a week, 20 hours a day.

Metro’s TBMs are pressurized, closed-face machines to minimize ground settlement during excavation. The tunnel is lined with precast concrete segments that are bolted together to form a ring. Segments are also gasketed to make the joints between segments water- and gas-tight.

Metro has contracted with Skanska Traylor Shea (STS), a joint venture to design and build the first section of the project.

The $9.3bn Metro Purple Line Extension is a 14.4km (nine-mile) underground subway project that will extend the Metro Purple Line from its terminus in Koreatown to Westwood/VA Hospital in West Los Angeles. Section 1 is expected to be completed in 2023, Section 2 in 2025 and Section 3 in 2027. 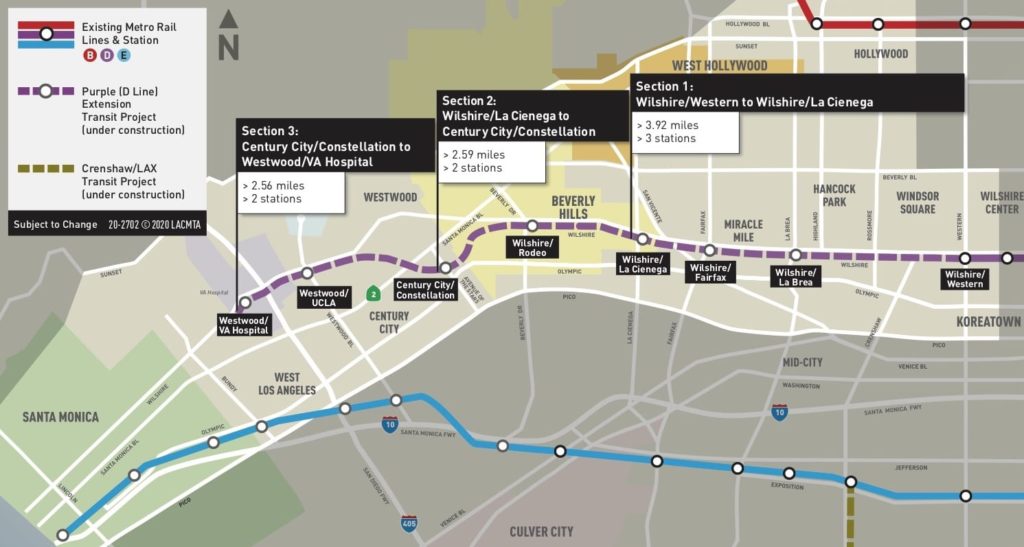