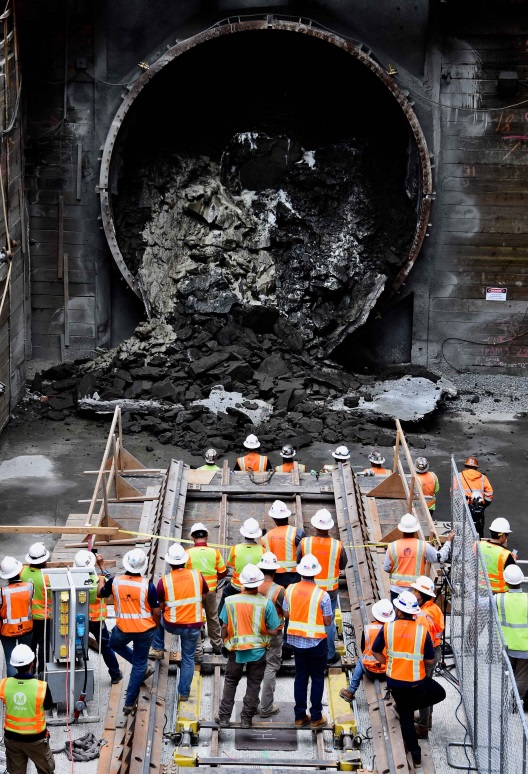 “The dream of connecting the Metro Rail system to the entire region is now becoming a reality with Angeli poised to continue her mission of completing the tunneling to 4th Street and Flower in a few months,” said Metro Board Chair John Fasana. “Today’s milestone speaks volumes in completing this important work.”

Angeli was lowered into the ground near the Little Tokyo/Arts District Station at 1st and Central last winter and began digging the tunnels in early February. In late April the TBM completed digging through the Historic Broadway Station at 2nd and Broadway on its way to 2nd Place and Hope.

Following today’s breakthrough, Angeli will be repositioned inside the station box area to continue tunneling the remainder of the first tunnel to 4th Street and Flower. Angeli will then be taken apart and transported back to the 1st and Central Station site in Little Tokyo where the TBM will be reassembled in order to begin mining the second tunnel.

“We are excited about the advancements made by ‘Angeli’ on this crucial transportation project. As this project moves ahead, we remain committed to the residents and businesses who have been impacted during construction,” said Metro Board Member and L.A. County Supervisor Hilda L. Solis. “Metro remains resolute in our efforts to offer supportive marketing assistance programs to local small businesses, including the Business Interruption Fund and Eat, Shop, Play.”

The $1.75-billion Regional Connector Transit Project is a 1.9-mile underground light-rail tunnel that will connect the Blue, Expo and Gold Lines in downtown Los Angeles and will include three new stations at 1st Street/Central Avenue, 2nd Street/ Broadway and 2nd Place/Hope Street. The rail line is expected to serve 88,000 riders daily – including 17,000 new riders – and save commuters up to 20 minutes by reducing the need to transfer when traveling to and through downtown L.A. Construction is expected to be complete in 2021.

“Transforming the L.A. region through an aggressive transportation initiative has taken a giant step forward today,” said Metro CEO Phillip A. Washington. “When completed, this project will be a real game changer for the entire region by connecting three light rail lines that together have more than 170,000 boardings every weekday. Users of the Metro Blue, Gold and Expo lines will reap the benefits of this project for generations to come.”

Completion of the twin 1.1-mile tunnels is expected in early 2018.

“RCC is pleased with the safety performance and progress made to date,” said Greg Zwiep, Deputy Project Manager for the Regional Connector Constructors. “Everyone involved takes pride in the work they are doing to improve upon our transportation system and bridge the gap in downtown Los Angeles.”