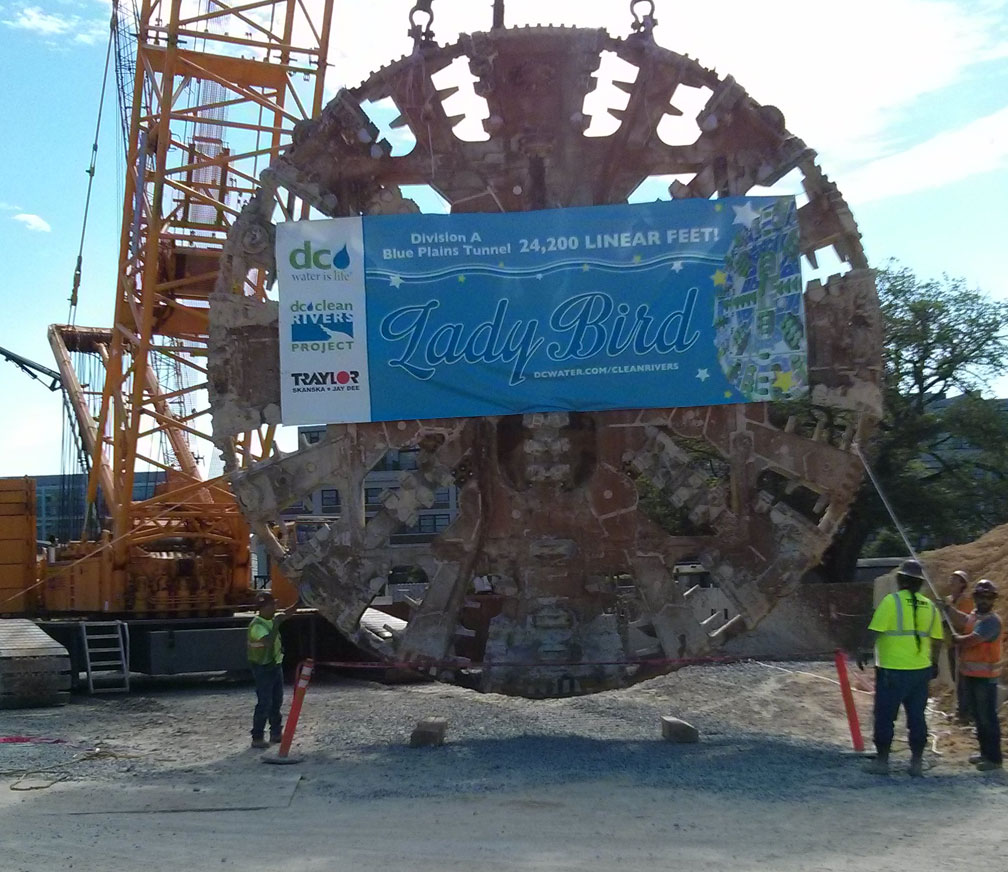 The 26ft (8m) diameter Herrenknecht EPB machine ‘Lady Bird’ that was used by Traylor/Skanska/Jay Dee JV to excavate DC Water’s Blue Plains Tunnel, has completed her mission, creating a four-and-a-half-mile-long tunnel that will be used to help improve the water quality in the Anacostia River.

Lady Bird completed her final drive in early-July and her cutterhead was extracted on July 23rd, from a 100ft (30m) deep shaft near DC Water’s Main Pumping Station in Southeast Washington, DC.

Lady Bird began her journey two years ago, in July 2013, from a starting point at the Blue Plains Advanced Wastewater Treatment Plant. She tunneled along the Potomac River northward to Poplar Point and then crossed under the Anacostia River and continued west, finishing at a deep shaft along Tingey Street, SE.

To prepare for her arrival, this shaft was filled with flowable fill concrete and water, to protect against changes in pressure as Lady Bird mined through the shaft wall. Crews then dug out the concrete to reveal the machine. A special heavy-duty crane was deployed to hoist the cutterhead and other pieces of the TBM that were too heavy for the cranes on site.

“This is a terrific milestone for DC Water’s Clean Rivers Project,” said DC Water CEO and General Manager George S. Hawkins. “We are fortunate that the tunneling went so smoothly, finishing on time and on budget, and I applaud our DC Water staff as well as Traylor/Skanska/Jay Dee and everyone else who took part in this successful dig.”

Carlton Ray, Director of the DC Clean Rivers Project, added “Lady Bird performed as well as projected—having a one-day best mark of 150 feet. In her best week, she tunneled 631 feet. This TBM’s success means we are one step closer to a cleaner Anacostia River.”

The next section will be mined by Impregilo/Healy/Parsons using another Herrenknecht TBM named ‘Nannie’, who is preparing to begin her tunnel at a site near RFK Stadium.

The 27,000ft long (8.2km) Northeast Boundary Tunnel is the longest portion of tunnel, and that contract has yet to be awarded. At the northern tip of the tunnel system is the First Street Tunnel, a relatively short tunnel that will be mined by Skanska /Jay Dee using a TBM named ‘Lucy’, and is designed as a flood protection project for the Bloomingdale and LeDroit Park neighborhoods.

Lady Bird removed approximately 1.2 million tons of material that she mined. This was hauled away in nearly 72,000 truckloads over the last two years. She built the tunnel with 28,189 pre-cast concrete segments which made up 4,027 full rings.

For more information on the DC Clean Rivers Program click here to read an interview with DC Water, its Program Manager, and Design-Build contractor in the April/May 2015 edition of North American Tunneling Journal.