Lake Mead's third intake is flooded in preparation for service

Salini Impregilo, through its “Vegas Tunnel Constructors” joint-venture with US subsidiary SA Healy, has started filling the new Lake Mead tunnel with water, the latest milestone towards completing this record-breaking project awarded by the Southern Nevada Water Authority (SNWA) in 2008.Southern Nevada – and especially Las Vegas – has risen to the challenge of the Colorado River Basin drought thanks to an innovative hydraulic system at Lake Mead, one of the largest artificial bodies of water in the world. The system will guarantee the supply of water to the city and surrounding areas for decades to come.

Formed by the Hoover Dam, the lake provides about 90% of the fresh water used by the Southern Nevada community of nearly two million people, which includes Las Vegas and Henderson.

The challenge faced by Vegas Tunnel Constructors was to install a new deep-water intake (known as Intake No. 3) at the bottom of Lake Mead and then, nearly 200m below ground, drive a 4.5km tunnel from the shore to this intake. 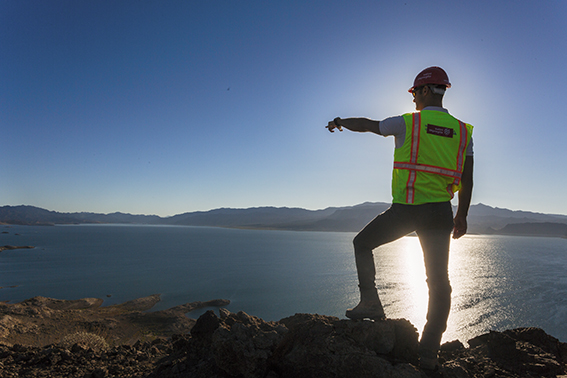 Due to its strategic location at the bottom of the lake, the intake will become the primary water supply for the Southern Nevada area and ensure continued access to water even with declining lake levels.

The filling of the tunnel will last approximately two weeks. By the end of September, Vegas Tunnel Constructors will remove the bulkhead that will connect the existing pump stations. Once the tunnel is completely full, the bulkhead installed at the bottom of Lake Mead will be removed allowing the tunnel to be put into service.

The project, which set a record in the engineering world by operating a tunnel boring machine at hydrostatic pressures of up to 15 bar, required several technical innovations to be developed on site (see NATJ, Feb/March digital edition).