On August 9, 2019, Seattle Public Utilities (SPU) reached an important milestone when the City of Seattle issued a “Notice of Intent to Award” the Ship Canal Tunnel project to Lane Construction having verified bid and bidder contract requirements. 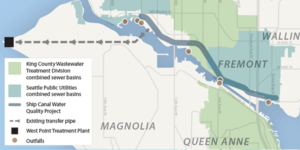 As one of the two largest components of the Ship Canal Water Quality (SCWQ) program, the tunnel project includes a 14,000ft (4.26km) long storage tunnel with an internal diameter of 18.83ft (5.74m) and a storage capacity of 29.2 million gallons.

“We expect to execute the contract with Lane Construction in mid-September and are very excited about working with them on the largest construction package in our program,” SCWQ Project Executive, Keith Ward, told NATJ. “In addition to Lane Construction’s contract, the program also includes an early works project, which will be completed in October, a deep Tunnel Effluent Pump Station (TEPS), and two conveyance projects.”

Combined sewage overflows (CSOs) will be intercepted and sent to the tunnel via a series of new diversion structures, which route them to one of five new drop structures. Connecting the drop structures to the new 80ft to 110ft deep (24.4m-33.5m) tunnel will require five shafts ranging in diameter from 11ft to 86ft (3.4m-26.2m), and depths up to 110ft; an approximately 650ft long (198m), 94in. i.d. (2.39m) curved microtunnel beneath the Lake Washington Ship Canal; and two short conventionally mined adits, each having a finished internal diameter of 8ft (2.4m).

“Our program, once completed, means cleaner water and less pollution in Seattle’s waterways,” says Ward. “In 2018, 84% of the City of Seattle’s combined sewer overflow volume was from outfalls that this program will address. Procurement milestones are proof that this important work is moving forward well.”

SCWQP is being delivered in response to an EPA Consent Decree, and under a Joint Project Agreement between SPU and King County, with the goal of limiting CSOs in the Seattle neighborhoods of Ballard, Fremont, Queen Anne, and Wallingford to no more than one overflow per year on average for each of the seven affected outfalls. Achieving this goal will keep nearly 80 million gallons of polluted water out of Seattle waterways each year, as these affected outfalls currently average more than 130 overflows per year.