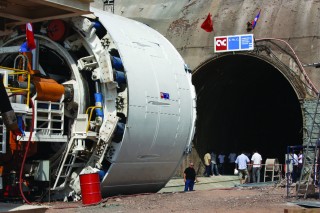 The Robbins TBM launched in February 2010 on a Laotian hydroelectric project.

The Robbins TBM has been designed to accommodate moderate squeezing ground conditions – an articulating cutterhead with overcutters makes the machine capable of excavating 100mm beyond nominal tunnel diameter.

Ground along the tunnel alignment consists of alternating strata of sandstone, siltstone, and mudstone supported by a final lining of 280mm thick, pre-cast concrete segments in a 5+1 ring, to provide a 6.9m i.d.

The machine was assembled in Robbins Solon, Ohio, USA manufacturing facility and shipped to the jobsite along the Nam Theun River, the largest tributary of the Mekong. Machine startup went smoothly, with an experienced crew and no significant TBM or equipment problems.

“We are presently excavating at 20m per day, but expect to reach 30m per day as tunnelling progresses,” said Barbàra.

Once complete, the Theun Hinboun Expansion Project will double generating capacity of the current scheme from 220MW to 440MW. The station will utilize water from the Nam Theun River, adding to current power supplies from the existing Theun Hinboun power station built by CMC di Ravenna in 1998