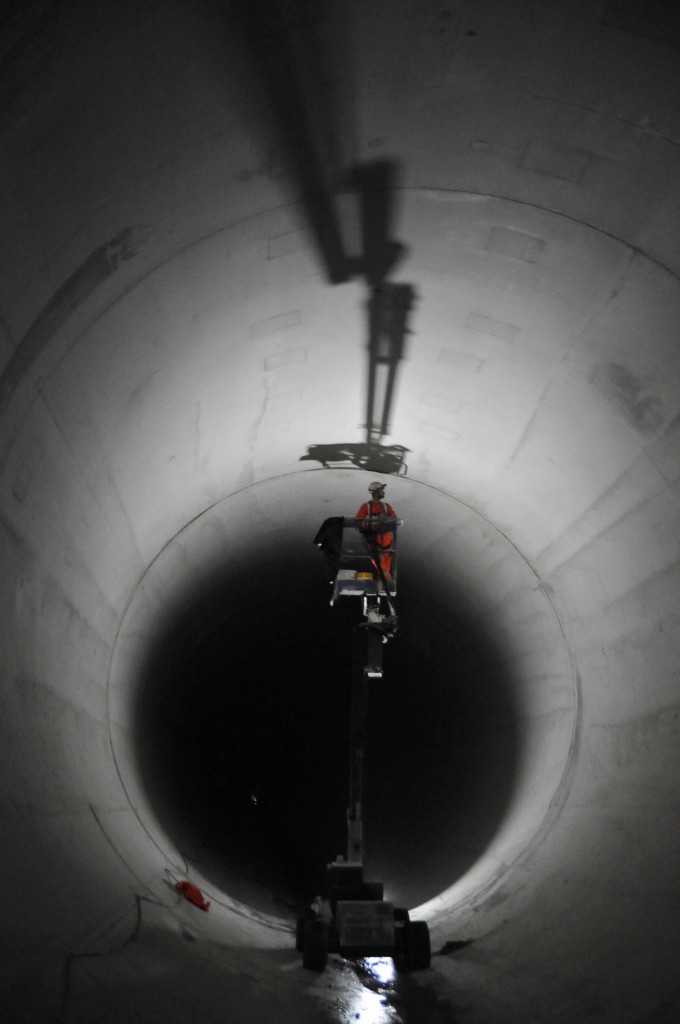 MVB, a joint venture of Morgan Sindall, VINCI Construction Grands Projets and Bachy Soletanche, has completed the secondary lining of Thames Water’s 6.4km long Lee Tunnel project under the supervision of project manager CH2M. This milestone marks the completion of all the civil works in the tunnel, 15 months after TBM, Busy Lizzie finished excavation in January 2014.

The innovative secondary lining technique, first developed on the deep shafts of the project, consisted of replacing conventional reinforced concrete with steel fibre reinforced concrete. MVB successfully developed a workable and pumpable concrete mix with Cemex and the newly developed Dramix 5DTM fibre (by Bekaert) to fulfill the high performance criteria set by the designer. Thanks to this method, a maximum productivity of 300 linear metres per week was achieved, which equals two concreting operations a day, 10 operations per week. The Lee Tunnel team used two 30.6m long shutters to cast a 300mm thick, steel-fibre reinforced secondary lining, reducing the previously bored 7.8m internal diameter to 7.2m. The lining was installed along the entire length of the 7,000m tunnel. The design element and associated construction logistics pushed current concrete technology to its limits. All concrete was batched on site; the works were constructed 24 hours a day, 7 days a week. The first pour was on 24 May 2014; the 220th (and last pour) was completed on 24 June 2015.

The project team are now gearing up to install six high-capacity pumps (3MW each),the completion of the shafts civils works and the MEICA, all required before commissioning can begin.

When complete, the £700M tunnel will help prevent 16M tonnes of sewage entering the River Lee each year during heavy rainfall – a result of London’s Victorian sewers not being big enough to cope with a 21st Century city which has since trebled in size and continues to grow, and has areas of natural drainage concreted over.

The 7m diameter tunnel will capture discharges from London’s largest sewer overflow at Abbey Mills Pumping Station in Stratford, following heavy rain. The tunnel will transfer the flows to Beckton sewage works, which is being expanded by 60 per cent to deal with the increased volumes. The tunnel reaches depths of up to 75m.

Thames Water awarded the Lee Tunnel contract to MVB in January 2010. The tunnel is due for completion at the end of this year.

The Lee Tunnel is the largest project awarded in the UK water industry since its privatisation in 1989.