The Ferrovial and Laing O’Rourke JV has completed tunnelling on the final 7.6km long drive on the central section of London’s 25km long, 7.2m diameter Tideway Project following the TBM breakthrough on Monday (30th November) on the Battersea to Bermondsey drive.
8.2m diameter NFM TBM Ursula’s breakthrough now means that more than 19km of the £4.2bn Thames Tideway Tunnel (as the super sewer is formally known) has been completed, with work on the remaining 5.5km Eastern section due to begin very soon. TBMs working on Tideway have now successfully passed beneath 21 Thames crossings, including Tower, Waterloo and Westminster bridges. 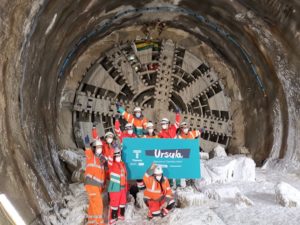 As part of its drive, TBM Ursula excavated over a million tonnes of spoil, all of which was removed from site using barges on the Thames – preventing more than 250,000 HGV trips.
Around 240 barges were also used to transport concrete segments to site. This section of tunnel is formed of 4,227 rings.

Tim Newman, Tideway’s Project Geologist, added: “Completing the longest single drive on the Tideway project is a wonderful milestone, and our teams have made great progress through a challenging year.
“TBM Ursula has tunnelled at incredible depths, encountering a real mix of geology – through clay, sand, gravel and chalk. The expertise required for such a task is immense and allowed us to quickly and safely adapt the tools on the cutterhead as needed.”
Viv Jones, Project Director for the central section, said: “The hard work from our teams on site and below ground has enabled us to safely continue tunnelling despite Covid – and continue work on this vital piece of infrastructure.

“Ferrovial and Laing O’Rourke, the contractors on the central section, have done a fantastic job, and I thank the teams involved for their efforts to clean up London’s iconic river.”
TBM Ursula will remain in place at the bottom of Tideway’s Chambers Wharf site while the team at Chambers Wharf prepares to launch TBM Selina, which will create the final and easternmost section of the super sewer.

Work on the 25km super sewer, which runs from Acton in west London to Stratford in east London, started in 2016.

The Tunnel has been divided into three sections – the 13km long Central described above, the East at 5.5km long, and the 7km west– with each section being constructed by a different joint venture of contractors.