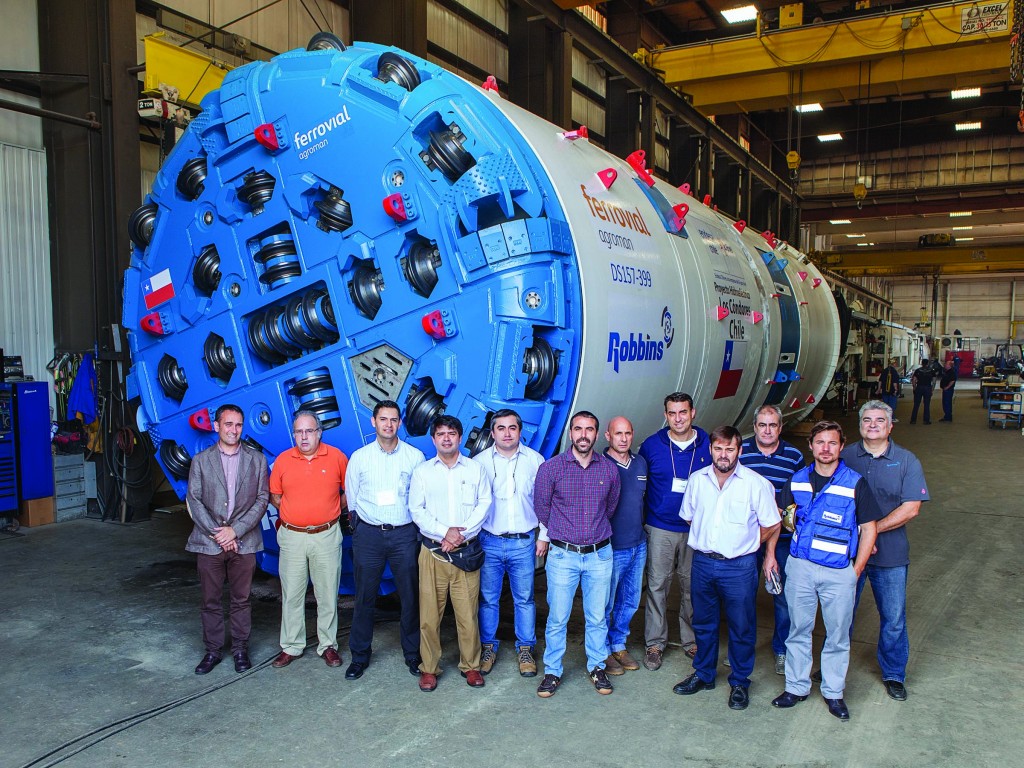 As of January 2017, contractor Ferrovial Agroman using its 4.56m Robbins Double Shield TBM had completed boring the 900m long access tunnel on Chile’s Los Condores HEPP, and was well on its way to boring the first section of headrace tunnel.  The machine embarked on its journey on May 27, 2016, and has since excavated over 1,300m of tunnel in total.

The journey to machine launch was arduous, requiring shipment of TBM components and vehicle transport on unpaved, mountainous roads. Ferrovial Agroman is responsible for the intake tunnel at the Los Condores Hydroelectric Project, and was well aware of the challenges associated with machine launch: “The location of the work is a big constraint due to its rugged terrain and geographical location in the Andes.” said Pello Idigoras, Tunnel Production Manager for Ferrovial Agroman.

The jobsite, located 360km south of Santiago, Chile, is part of a new 150MW power plant and intake tunnel. The TBM is being used to bore two sections of the intake tunnel, the first measuring 6km and the second measuring 4.4km. A section between the two tunnels will be excavated by drill and blast, making the intake tunnel about 12km in length.

The tunnel, located in the mountainous Maule Region of Chile, is being bored in two types of rock: sedimentary and volcanic. The rock has been tested at strengths up to 100 MPa, with at least two fault zones – the first of which has already been traversed in rhyolite, andesite, tuff, and breccia.  For Idigoras, the conditions are well-suited to Double Shield tunnelling: “We have good quality medium to hard rock for Double Shield excavation overall,” Idigoras said. Despite that, some areas of challenging ground persist. To cope with the conditions, including steadily increasing water inflows at rates of up to 3,500 l/min, the contractor is utilizing cementitious grouting and chemical grouting with polyurethane and foam. Such ground conditioning techniques were anticipated and the Robbins Double shield was designed to effectively apply these techniques.
As the TBM excavates, it is lining the tunnel with 250mm thick, 1.2m long concrete segments in a 4+1 arrangement. The machine is currently progressing at a rate of up to 25 rings per 20 hours of boring. Crews are operating in two 10-hour shifts with one 4-hour shift dedicated to maintenance.

Idigoras sees the TBM performance and completion of the access tunnel as huge project milestones, though much work remains to be done. “After many months working in engineering, manufacturing, installation, and commissioning, we are proud to see this result. It would be impossible to name all the people who participated in this project thus far but they, as a whole, have managed to get the TBM started digging and boring well.”