Singapore’s Land Transport Authority (LTA) has announced the alignment and station locations of the Cross Island Line Phase 2 (CRL2) from Bright Hill to Jurong Lake District. CRL2 is approximately 15km and comprises six underground stations – Turf City, King Albert Park, Maju, Clementi, West Coast and Jurong Lake District. CRL2 will improve public transport accessibility for those living in the west including areas such as Sunset Way and West Coast that are not currently served by an MRT line. Two of the six stations will be interchange stations, with King Albert Park station connecting commuters to the Downtown Line, and Clementi station to the East-West Line.

With the improved connectivity, CRL2 will shorten travel times for commuters travelling to and from the western parts of Singapore. For instance, a student travelling from Hougang to Ngee Ann Polytechnic will enjoy travel time savings of up to 30 minutes – from more than an hour by train and bus today to 35 minutes on the CRL. As with the introduction of all new rail lines, LTA will review the bus services in surrounding areas to optimise connectivity to CRL2 and the rest of the rail network.

Construction works for CRL2 are expected to commence in 2023, with the stations opening by 2032.

Together with the 12 stations in CRL Phase 1 and four stations on CRL – Punggol Extension, CRL2 will provide alternative travel options for commuters and help to redistribute commuter load across the entire rail network. It will also enhance connectivity for eastern, western and north-eastern areas and provide accessibility to existing and new growth areas such as West Coast and Jurong Lake District. This will help LTA achieve our target of having 8 in 10 homes within a 10-minute walk to a train station.

To facilitate the construction of CRL2, three part lots of private land, consisting of two industrial units owned by JTC that are currently leased to private entities, and a stratum of subterranean space located under part of a private land parcel, will be acquired by the Government.  The Singapore Land Authority (SLA) has gazetted the acquisition of the affected land today. SLA and LTA will work closely with the affected landowners and sublessees and assist them through the acquisition process.

The CRL is Singapore’s eighth and longest fully underground MRT line at more than 50km long. It will serve existing and future developments in the eastern, north-eastern and western corridors, linking major hubs such as Jurong Lake District, Punggol Digital District and Changi. Almost half of the CRL stations are interchange stations, making it easier and more convenient for commuters to travel across the rail network.

CRL will be constructed in three phases. Announced in 2019, Phase 1 of the CRL is 29km long, and comprises 12 stations from Aviation Park to Bright Hill. Since March this year, all the civil contracts for CRL Phase 1 have been awarded. Construction works have commenced and are expected to be completed by 2030. A 7.3km extension to CRL, which connects Pasir Ris to Punggol, was announced in 2020. CRL-Punggol Extension comprises four stations, namely Punggol, Riviera, Elias and Pasir Ris. Construction works are expected to commence by end 2022 and will be completed in 2032.

The Environmental Impact Study and Heritage Impact Assessment for CRL2 have been completed and the reports will be published on LTA and the Urban Redevelopment Authority’s respective websites next month for public feedback. Engineering studies for CRL Phase 3, which will serve the Jurong Industrial Estate, are currently ongoing. More details will be announced after these studies are completed. 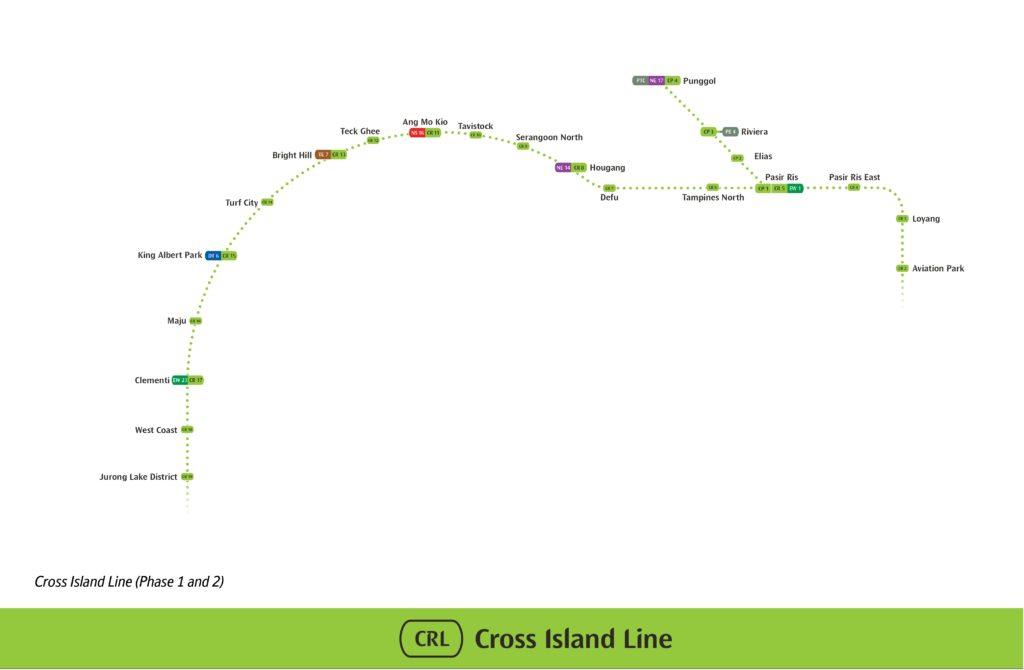